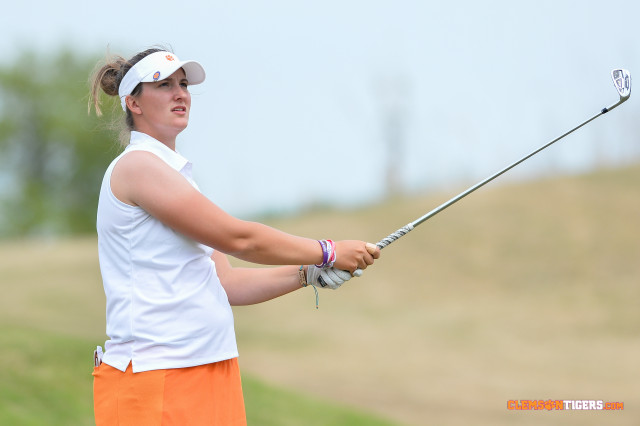 Clemson, S.C.—Sydney Legacy and Ana Paula Valdes had three-under par rounds of 69, and Kennedy Swann and Alice Hewson both had their second straight under-par days to lead Clemson to a 279 team score and a fifth-place standing after two rounds of the NCAA Tallahassee Regional.

The top six teams in the 18-team field after Wednesday’s play will advance to the NCAA National Tournament at Stillwater, Okla. May 18.   Clemson has a team score of 564, 12-under par and just six shots behind first place and No. 1 seed Alabama. Clemson is just two shots behind second-place Washington and one shot behind host school Florida State and seventh ranked Furman.

Most importantly, Clemson is 10 shots ahead of seventh-place Wake Forest, who stands at 574 through two rounds.   The Tigers did not count a double bogey on Tuesday and counted just eight bogeys against 17 birdies.

Clemson is attempting to qualify for the NCAA National Tournament for the second straight year under second year head coach Kelley Hester.

Clemson’s nine-under par 279 score on Tuesday was the second best score vs. par in any tournament in school history, the best in any postseason tournament. The only team round that is better is a 12-under-par 276 in the second round of the Clemson Invitational on March 24, 2018. Clemson’s previous best NCAA Tournament round was a 282 in the second round last year in Athens, Georgia.

Four Clemson players scored under par in the same round for just the second time in school history. Legacy finished with five birdies and two bogeys, including birdies on the 17th and 18th holes. She was a big reason Clemson shot four under par as a team on the last two holes.

The senior from Lexington, S.C. who will graduate this week, is three-under on the par three holes in the two rounds so far, tied for best among the 96 players in the field. Legacy stands at 140 through 36 holes, tied for ninth in the field.

Valdes had four birdies and just one bogey on Tuesday and she is in a tie for 15th after two rounds thanks to a 141 total. The sophomore from Mexico has 29 pars through two rounds, tied for first in the field.

Swann is tied with Valdes for 15th place through two rounds with a 141 total after rounds of 71-70. She was especially effective down the stretch as she made birdie on three of her last five holes. She had a career high tying six birdies on the day.

Hewson shot her second straight 71 to finish with a 142 through two rounds, tied for 20th.  She had a clean round of two birdies, one bogey and 16 pars on her second 18 on the par 72 Don Veller Seminole Golf Course. Marisa Messana had a solid day also with a two-over-par 74. She started off with birdies on the third and fourth holes to get Clemson to five under through three holes.

Clemson will play with two top 10 teams during the final round on Wednesday. The team is paired with seventh-ranked Furman and 10th ranked Arizona in the 9 a.m. to 9: 40 a.m. time slot.