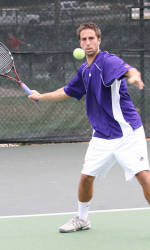 CLEMSON, SC–Clemson will play Virginia Tech Thursday at 12:00 pm in the first round of the 55th Annual Atlantic Coast Conference Men’s Tennis Championship at Sanlando Park in Altamonte Springs, Fla.

Clemson is seeded 12th in this year’s tournament and has a 15-19 record overall. The Tigers finished 1-10 in the ACC this season. Ironically, Clemson’s only ACC win this year was against Virginia Tech on March 21. The Hokies are the number five seed.

The Tigers are led by Kevin Fleck as he has won 20 matches in singles play this season. Carlos Alvarez plays number one singles for Clemson and he has won 18 matches this season.

This will be the last ACC Tournament for Clemson Head Coach Chuck Kriese. Kriese will retire from Clemson at the conclusion of the 2008 season. He currently has a 685-418 career record as he is in his 33rd year as a head coach at Clemson. That career figure makes him the fifth winningest active Division I Coach in the United States. He is also the all-time winningest coach in the Atlantic Coast Conference for total wins (685) and league victories (166).

The 33 years is the longest tenure by a head tennis coach in the history of the Atlantic Coast Conference. Doyle Royal was at Maryland for 27 years during the 1954-80 era. It is also the second longest tenure in Clemson history regardless of sport. Former baseball coach Bill Wilhelm spent 36 years at Clemson (1958-93). Kriese passed former football coach Frank Howard. Howard coached for 30 years (1940-69).

Clemson is one of the top teams nationally as far as appearances in the NCAA team tournament. Under Kriese, the Tigers went to 11 straight NCAA team tournaments between the years of 1979 and 1989, the second longest streak of NCAA tournament appearances in Clemson team sports history. In the 24 total appearances, Clemson has a 16-24 overall record. Clemson has reached the Final Sixteen 12 times, and the Final Eight seven times, including 2004. Clemson had seven straight top 10 finishes from 1980-86, third for the longest streak of top 10s in school history regardless of sport.

Under Head Coach Chuck Kriese, the Tigers have been to more NCAA team tournaments than any other ACC school.