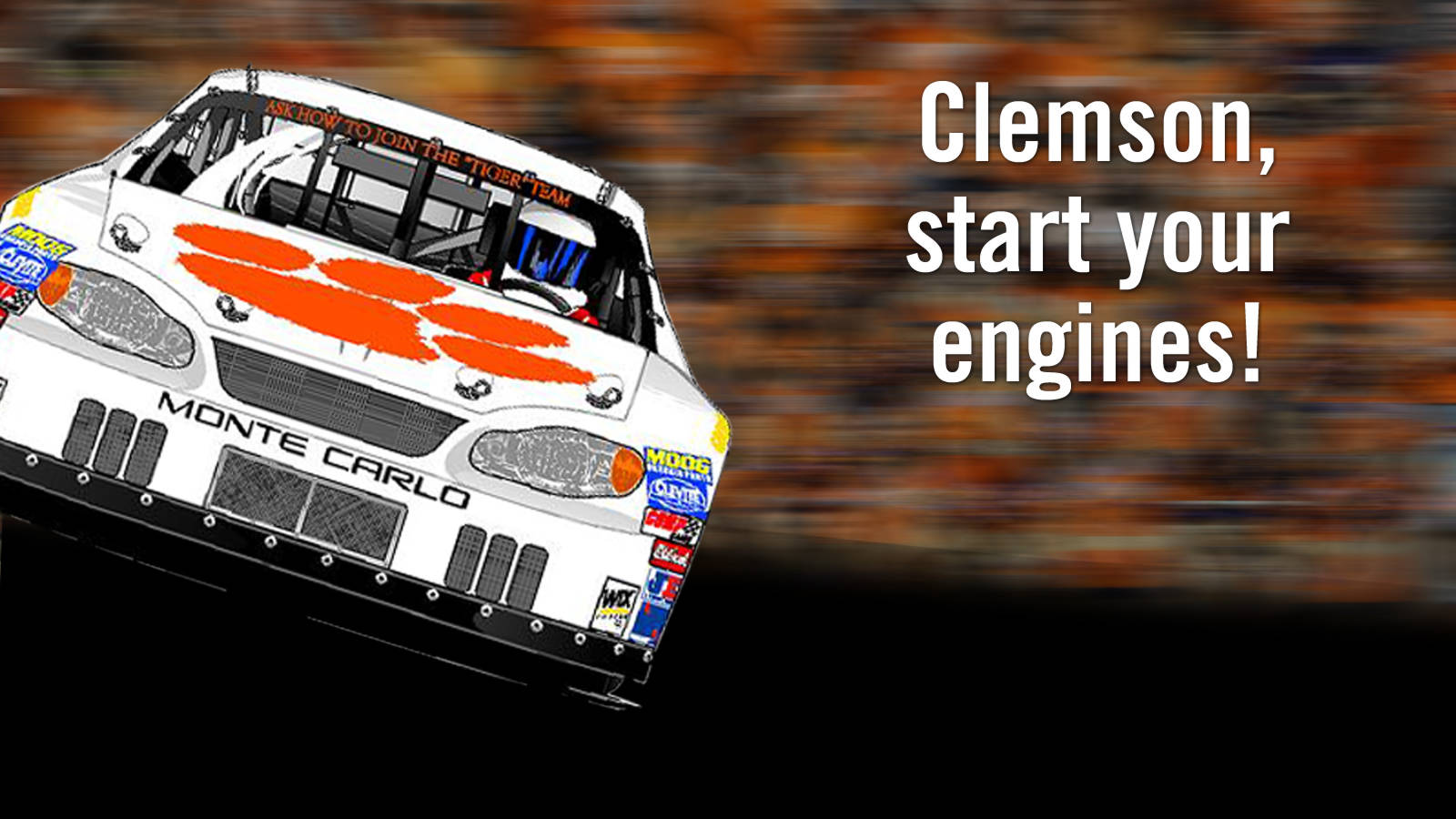 CLEMSON, SC (www.clemson.edu) – NASCAR Nationwide driver Mike Wallace will be on campus Saturday with an orange and white Clemson show car to promote his partnership with a new marketing team – a group of nine talented Clemson students.

The car will be parked inside Gate 1 of Memorial Stadium during the Georgia Tech game. Wallace will sign autographs at the car during halftime and after the game. He will also be at a meet-and-greet before the game in the Sirrine Hall courtyard.

The past month has been a whirlwind of preparation, but one the students have absolutely loved. And there’s more to come. As part of this partnership, the Clemson marketing students will develop long-term and short-term marketing plans for Wallace’s No. 01 car, cultivate potential donors, develop sales proposals, meet potential customers, close deals and activate the brand. This is a pilot program and, according to Wallace, is the first such program between a university and NASCAR.

NASCAR Nationwide driver Mike Wallace, third from right, and some of the members of the Creative Inquiry class that will develop long-term and short-term marketing plans for his No. 01 race car.

Wallace, who races for JD Motorsports out of Gaffney, S.C., doesn’t have a full-year sponsor. The students will be working to attain sponsorship rights for Wallace’s No. 01 car for both the 2012 and 2013 race seasons.

“I was sitting in this meeting (with Wallace), and it’s everything I have ever wanted to work on, and I kept thinking, ‘We have a long way to go,’ ” Clemson senior Matt Wehman said.

The students’ first step is to raise money to make Wallace’s car a Clemson car – featuring the Tiger Paw and signature orange color – for the season’s final race, the Ford EcoBoost 300. The Nov. 17 race in Homestead, Fla., is part of the Ford Championship Weekend where NASCAR will crown its Sprint Cup, Nationwide and Camping World Truck series champions.

“When we get the car in the race, we’re going to get national talk about this project,” Wehman said.

The show car will be in Clemson on Saturday to generate buzz and awareness and help get the word out to the Clemson Family about what this group of students is doing.

The nine students are part of a Creative Inquiry class – Clemson’s undergraduate research program – and were chosen based on related classes they had taken, their skill sets, whether they had sports or NASCAR-specific interests and proven sales ability.

“There is nothing more tangible than this,” Fine said. “They’re seeing the logistics, the time commitment to a huge project. As professors, our role is to direct when needed, get the right approvals and make sure all processes are followed.”

Read the article on www.clemson.edu:http://features.clemson.edu/creative-services/students/2012/clemson-start-your-engines/