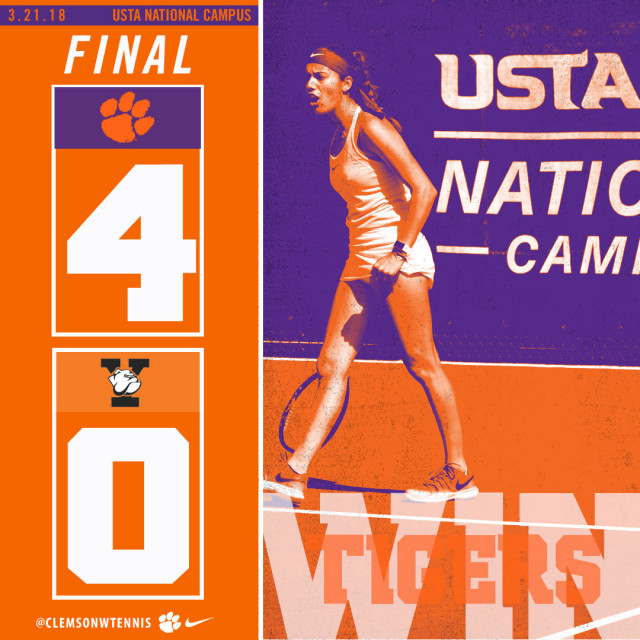 LAKE NONA, Fla. – The Clemson women’s tennis team defeated Yale 4-0 on Wednesday morning at the USTA National Campus in Lake Nona, Fla., before falling to 25th-ranked UCF 4-3 in the afternoon. With today’s results, the Tigers are now 8-9 on the season, while the Bulldogs are 5-9 and the Knights improve to 12-2.

Clemson 3, No. 25 UCF 4
Clemson won the doubles point against the Knights, its 11th time winning the doubles point out of 17 matches. Marie-Alexandre Leduc and Fernanda Navarro, ranked 34th in the nation in doubles, defeated their UCF opponents 6-3 at No. 1. The matches on Courts 2 and 3 were both tight, with Laura Martiand Daniela Ruiz winning 7-5 at No. 3 to claim the doubles point.

The Knights took a 2-1 lead in the match with wins at No. 4 and 5 singles, before Leduc and Navarro brought the Tigers back with wins at No. 1 and 2. Leduc won 6-4, 6-4 over Ksenia Kuznetsova, and Navarro defeated Maria Martinez, 6-2, 7-5. Tate Schroeder and Ally Miller-Krasilnikov never stopped fighting, but UCF came up with victories at No. 3 and 6 singles, respectively, to claim the team win.

Up Next
The Clemson team will be back in action on Friday, March 30 as it faces NC State at 12 p.m. in a match that will be played in Charlotte, N.C. If outdoors, the Tigers and Wolfpack will play at the Halton-Wagner Tennis Complex on the campus of UNC Charlotte. If indoors, the match will be held at Life Time Athletic in Charlotte, N.C. On Sunday, April 1, Clemson hosts Notre Dame at 12 p.m. at the AU Tennis Center in Anderson, S.C.