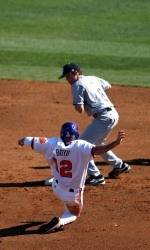 Clemson & South Carolina to Make Up Rainout on April 7

Clemson and South Carolina will face off on the diamond on April 7 at 7:00 PM at Carolina Stadium in Columbia, announced Thursday. The makeup game was scheduled after the March 1 game between the two teams was rained out. Fans who purchased tickets for the March 1 game can present those tickets for admission to the April 7 contest. The April 7 game will be broadcast live on the radio by Clemson Tiger Sports Network. The Tigers and Gamecocks are also scheduled to play at Clemson on April 8 and in Columbia on April 22.