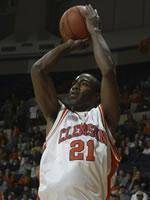 CLEMSON, SC – Clemson men’s basketball guard Jimmy Hudson will transfer from Clemson following the completion of the Spring semester. The sophomore from Eustis, FL, is currently exploring his options to continue his academic and athletic career at another school.

“After talking over this decision with my family and Coach Purnell, I have decided that it is time for me to pursue my eduational and athletic goals at another institution where I can enjoy more on-court opportunities and showcase my athletic ability,” stated Hudson. “I wish the coaching staff, my teammates and the basketball program all the best in the future.”

Clemson head coach Oliver Purnell said, “Jimmy has been a positive member of this basketball team and has shown improvement over the last two years. I wish him much success as he continues his collegiate career.”

A reserve guard for the Tigers, Hudson enjoyed one of the most successful games of his Clemson career against Indiana State in this year’s Rainbow Classic Tournament. He tallied six points in 18 minutes of playing time, hitting three of seven shots from the field. Hudson also saw 15 minutes of action against Wake Forest in Clemson, scoring five points with two rebounds. In the Tigers’ first game of the season, Hudson recorded a career-best five assists and four steals in 17 minutes of play. Overall, Hudson saw action in 22 games, and averaged one point in five minutes per game.

As a freshman, Hudson played in 22 games with a season-high 14 minutes against NC State. He played seven minutes in his first game as a Tiger, hitting a three-point shot and adding a rebound, a block and a steal in the Tigers’ win over Gardner-Webb. Against Georgia Tech, Hudson handed out three assists with two steals and three rebounds in 11 minutes of play. In his rookie season, he averaged 0.4 points per game in 4.6 minutes per game.