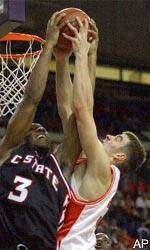 CLEMSON, S.C. – Will Solomon, the Atlantic Coast Conference’s leading scorer, had 25 of his 29 points in the second half to rally Clemson to its first league victory, 72-69, over North Carolina State on Saturday.

Solomon had trouble finding his shot early, going 2-of-7 in the first half. But he scored the team’s final seven points (10-6, 1-2 ACC) as the Tigers equaled their victory total from a year ago.

North Carolina State (8-6, 0-3) had a chance to tie in the closing moments, but Anthony Grundy was called for walking with 5.6 seconds to play.

After Solomon made a free throw, Clifford Crawford’s last-chance 3-pointer was off the mark.

The Wolfpack looked ready to take control, going ahead 42-36 midway through the second half. But Solomon hit two free throws and threw a nice pass to Chris Hobbs, who converted a three-point play that tied things at 43-all. Solomon’s basket with 9:54 to go gave the Tigers a 49-48 lead and his 3-pointer capped a 13-4 run.

The Wolfpack made a game of it at the end, closing to 67-65 on two straight 3-pointers with 2:19 to play. Twice more they came within a basket of Clemson down the stretch, but each time Solomon scored to keep the Tigers in front.

The Wolfpack played without injured point guard Archie Miller and it showed. Grundy made just 6-of-27 shots. Damien Wilkins, son of ex-NBAer Gerald, was 1-of-10. The team finished 20-of-67 to start 0-3 in the league for the second time in five seasons.

Hobbs, a freshman, had 10 points and 11 rebounds for the Tigers, who have won three in a row against the Wolfpack.

Solomon hit Clemson’s first shot, then went cold with only one basket the next 19 minutes.