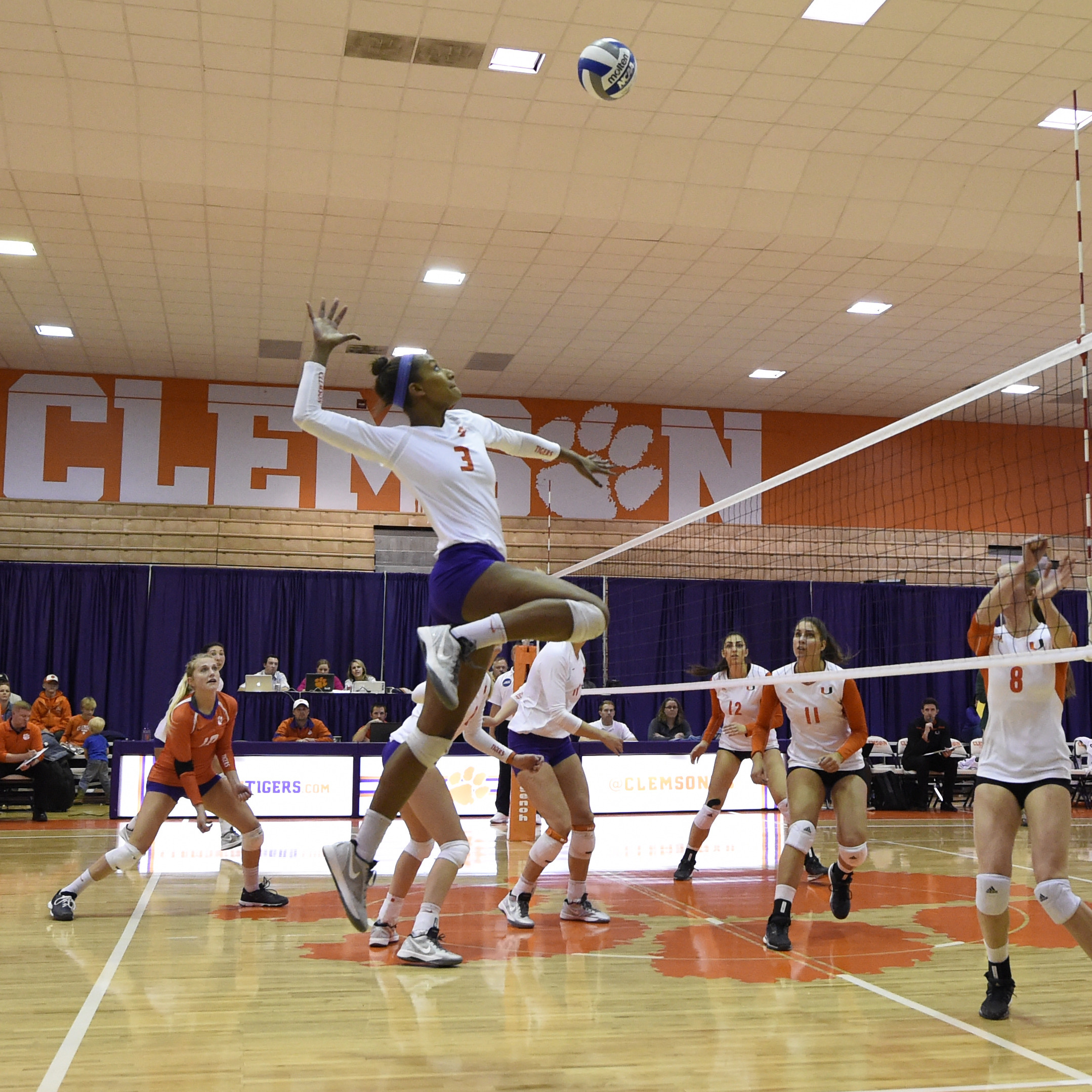 Clemson Slighted By Miami In Three

CLEMSON, S.C. – After a hot start in the first, Miami was able to regroup and hold off the Tigers to win the match, 3-0 (24-26, 16-25, 20-25). Head coach Hugh Hernesman praised his young squad for rising to the occasion against a team on its way to the NCAA Tournament.

“This team is not ever going to back down. We’re not going to back down to anybody,” said Hernesman. “Miami is a great team and they’re on a path to the NCAA Tournament. So for us, that’s the goal is to qualify for the NCAA Tournament so we have to want to go against that level of competition to see what we’re capable of doing because it’s just different. A lot of this conference is like that anyway so it brings out the best in you.”

Together, the team’s aggressive play paid off as it had the Hurricanes on their heels early on, controlling much of the first set until Miami came back to win the set 26-24. Clemson found itself down 20-15 in the third but managed to threaten Miami’s lead by pulling within three with a 23-20 score. However, Miami made the plays when it needed to once again winning two consecutive points to take the set.

“One of the things we talked about before the match was to be aggressive and stay aggressive,” said Hernesman. “We talk a lot about always being aggressive, but I don’t know if we’ve quite gotten to that level yet because this is a team that doesn’t want to make a lot of mistakes. You have to be okay with making those mistakes when you’re making aggressive errors.”

“I thought we did a good job today of doing that and it’s interesting because we only made 13 hitting errors, so in a match where we were playing more aggressive, we actually had less errors. So that’s a nice lesson for them is that sometimes being tentative is going to create more bad situations for you.”

Leah Perri logged her 23rd match this season with double-figure kills as her 10 in tonight’s match gives her 400 kills on the year marking her first season with 400 kills or more.

“400 is a big number for anybody and to put up 400 in the ACC is a pretty big deal. She should be really proud of that,” Hernesman said. “She’s been surrounded by upperclassmen her first two years here and hasn’t really had a voice yet until now and rightfully so.”

“She’s becoming more vocal, she’s becoming a real good leader on this team and she backs it up. She can be a good leader because she comes to practices everyday and matches everyday and works just as hard as anybody on the floor. She’s sacrificing for the better of the team too. She’s better on the right than she is on the left so to compete like she has in a position out of her comfort zone is impressive and I’m real happy with that.”

The junior finished the match with six digs as well but it was her serve that had Miami off-guard throughout the contest.

“I thought Leah’s serve really had them on their heels,” said Hernesman. “She only had one ace but she had them consistently out of system and I thought that made a difference.”

Kate Federico, Alex Lynch and Sydney Moseley supported Perri’s offensive effort with 21 kills between them and just four hitting errors for a .333 hitting percentage. Federico led the trio with eight kills on 16 attempts with an error to complement her 20 assists. She connected with Lynch for seven kills on 10 swings and one error, giving her a .600 hitting percentage. Moseley also benefitted from Federico’s sets, killing six balls while dropping three service aces on the Hurricanes.

“A reoccurring theme for us is we need to get Leah some consistent help. A lot of that too is, in two-hitter rotations, we need Kate to be active offensively and I thought she did a really good job of that. She kept going at them and I thought she was the difference maker in that first set.”

“I thought Alex played great,” Hernesman added.” She came in when Kailey (Harvell) went down and gave us a nice spark. She really produced in a different role, coming off the bench and playing on the right side.”

Keelie Arneson and Kennedy Wilson-Talmadge led the back row again with 18 digs between them. Arneson advanced to sixth all-time and is now five digs away from cracking the NCAA’s top five career digs leaders. Her 11 digs tonight give her 2,689 digs in her career and only 11 away from becoming one-of-five student-athletes in NCAA history to record 2,700 digs in their career.

The Tigers are back in action for their season finale against #20 Florida State on Friday at 1:00 p.m., in Jervey Gym.