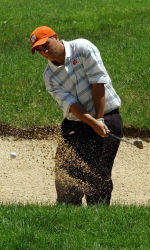 Clemson Sixth after First Round of ACC Tournament

New London, NC – Senior Jack Ferguson fired an opening round 71 to lead Clemson to a 300 team score and a sixth-place standing after the first round of the ACC Men’s Golf Tournament.

The 52nd annual event is being played at the par 72 Old North State Club in New London, SC. The 10 teams will play 18 more holes and Saturday and finish the tournament on Sunday with the final 18.

Friday’s round was played in high winds. Ferguson was one of just five golfers who broke par on the 7102-yard layout that is north of Charlotte. Ryan Blaum of Duke leads the individual race with a 68, two shots better than Brad Tilley of Virginia.

Clemson stands at 12 over par as a team after the first round, just eights shots behind team leader Duke. Georgia Tech is second at 293. Clemson is just three shots out of third place as Florida State shot a nine-over par 297, followed by a 299 score for NC State and Virginia. Clemson is two shots ahead of Maryland and Wake Forest, who shot 302 team scores. Virginia Tech is ninth at 20-over-par 308, while North Carolina is 10th at 26 over par 314.

Clemson has won the event the last two years, both on the Old North State Course and has captured four ACC titles overall on this course. Clemson has never won the ACC Tournament three consecutive years, but has nine ACC Championships overall, including eight under Head Coach Larry Penley, four at The Old North State Club.

The senior from Seneca, SC had a consistent round with two birdies and just one bogey to go with 15 pars. Ranked fifth in Clemson history in career stroke average, Ferguson has a career stroke average of 70.3 for his career in the ACC Tournament. He has shot par or better in all seven of his rounds at The Old North State Club.

Brent Delahoussaye finished with a disappointing bogey on the 18th hole, but shot a solid 73 for the day and is tied for seventh, giving Clemson two players in the top 10.

Brian Duncan, a junior from Greenville, had an opening round 77. He had a one-over-par 37 on the front side, including a birdie on the ninth hole, but a double bogey on the windy par three 17th kept him from a top 20 ranking after the firs day. His 77 places him in 26th place.

Martin Catalioto got off to a difficult start as he was four over par for the first four holes. He settled down and was just three over for his last 14 holes. Tanner Ervin, a freshman playing in his first ACC Tournament, shot an 85, including a nine on the last hole.