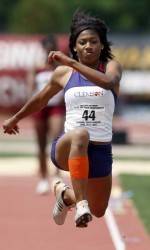 Mamona returned to action in the triple jump, and the result was the same the last time she competed in the event (2010 NCAA Outdoor Championships). She jumped 43’10” to outlast teammate April Sinkler, who was runner-up with a mark of 42’8.75″.

Both of Clemson’s shuttle hurdle relay teams finished second on Saturday, but both were the top collegiate teams. The women established a school record for the second straight year at the Florida Relays, this time with a time of 55.21. Clemson’s A team actually did not finish after the third leg fell down after a hurdle. The men’s team compiled a time of 57.10.

Saturday marked the debut of Clemson’s 4×100 meter relay teams as well. The women placed third overall, second among collegiate teams. The Tigers had a good season-opening time of 44.41. Clemson is defending ACC champion in the 4×1. The men’s team was 12th overall with a time of 40.68.

The 4x400m relays both provided outstanding times on Saturday. Clemson’s women finished second overall, and were the top collegiate team. The group of Marlena Wesh, Stormy Kendrick, Sonni Austin and Brianna Rollins had a time of 3:35.18. On the men’s side, the relay team placed eighth with a solid time of 3:08.33.

The men’s 4x800m relay also competed Saturday. Distance coach Brad Herbster’s lineup was composed of Jasen Turnbull, Chris Slate, Nathan Hendershot and Aaron Ramirez. The team turned in a time of 7:33.12 and was sixth, just a second out of fourth place.

In the men’s pole vault, a pair of young competitors fought the windy conditions. Michael Kopanski tied for 13th after clearing 15’3.75″ on his first attempt. Jeffrey Willis cleared the same height, but he did it on his second try and was 16th in the standings.

Liane Weber was Clemson’s top performer in the women’s javelin Saturday morning. The senior from Wangen, Germany hit a throw of 138’10” in her first action in the event since last April at the ACC Outdoor Championships.

Danielle Curry fouled twice in the women’s shot put, but did record a legal, 12th-place mark of 46’5.25″. Her mark is good enough for seventh on the all-time Tiger performance list.

Stephen White was solid in the men’s discus throw. The red-shirt junior from Beaufort, SC hit a mark of 157 feet even, good enough for 11th place.

The teams return to action next weekend in two meets, the Texas Relays from April 7-9 and Spec Towns Invitational in Athens, GA on April 8-9.