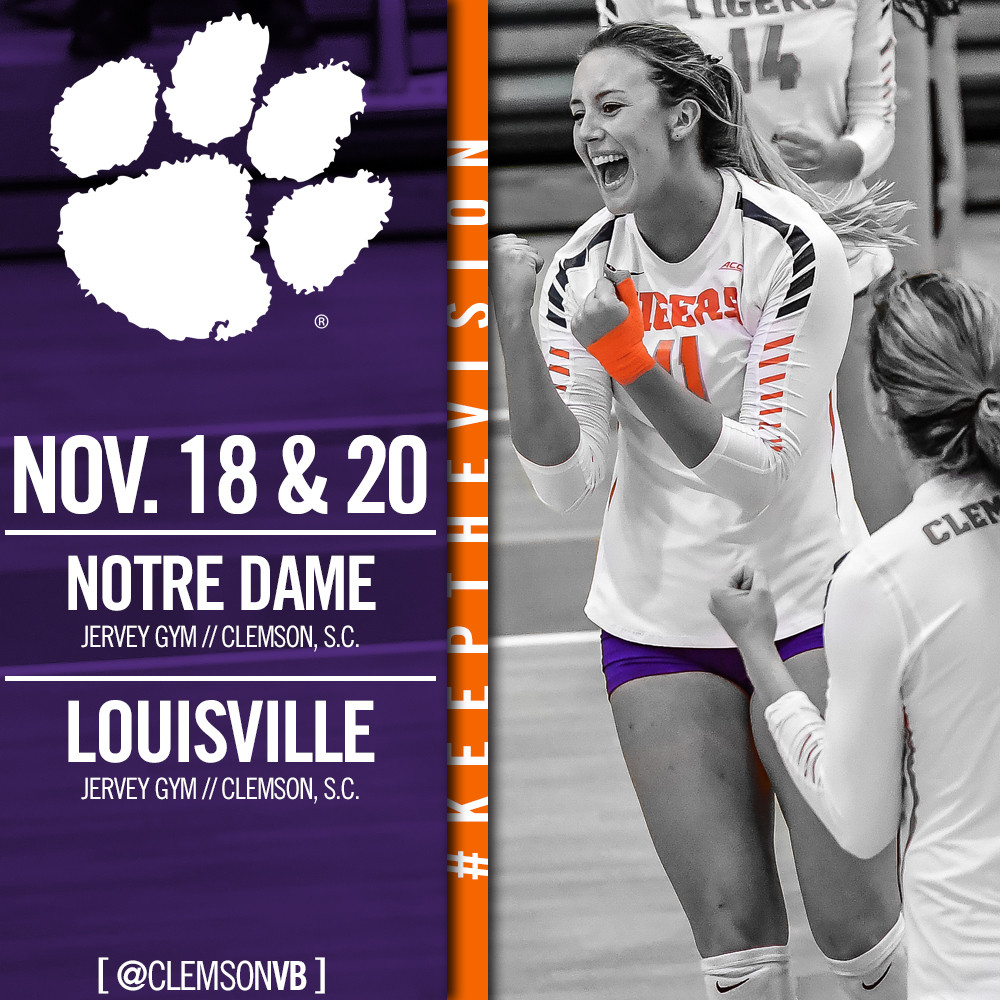 CLEMSON, S.C. – Coming off a tough loss against NC State, Clemson comes back to Jervey Gym for its final two home matches of the season this weekend. The Tigers will host Notre Dame on Friday, November 18 at 7:00 p.m., before hosting Louisville on Sunday, November 20 at 1:00 p.m. Friday night marks senior night for the Tigers as the careers of Leah Perri, Sydney Moseley and Irem Bayramoglu will be celebrated before their match with the Fighting Irish begins.

Clemson enters the weekend following one of its best offensive performances of the season against the Wolfpack on Sunday afternoon. Taylor Daniel registered a career best 35 assists, leading to a combined .269 hitting percentage for the Tigers. Due to injuries, Perri and Keely Hayes were forced to play out of position however both Tigers still managed to turn in impressive efforts. Perri led the match with 14.5 points to her credit as a middle blocker with 13 kills, a .242 hitting percentage, nine digs and three blocks. Hayes was efficient on the outside killing six balls on 15 attempts with just one error to hit .333 on the day with nine digs and two blocks.

Megan McGinley joined Hayes, hitting above .300 with a .308 hitting percentage. The Sophomore middle finished with six kills and a pair of errors on 13 swings, complemented by seven blocks. Both Kailey Harvell and Tori Woogk turned in efficient efforts as well, hitting .273 and .261 respectively on the pins. Woogk registered eight kills while Harvell added seven to go along with two blocks.

Perri’s 11th kill of the day was a historic one as it gave her 1,441 kills in her career, tying her for 10th all-time in program history with Lia Proctor on Clemson’s list of all-time career kill leaders. She’s now in sole possession of 10th place on the list with 1,443 kills in her career. The match marked her 22nd match in 2016 with 10 kills or more and she was just a dig shy of her 10th double-double this season.

Emily Curtis’ 14 digs on Sunday afternoon marked the freshman’s 15th match of 2016 with 10 digs or more.

Over the course of the last nine matches, McGinley has perhaps swung the hottest hand for Clemson as she has hit .287 with 57 kills and 18 errors on 136 swings. She also has 26 blocks in that span.