Clemson, S.C.—Clemson was selected as the number-four seed at the Austin, Texas Regional of the NCAA Men’s Golf Tournament on Wednesday.  The Tigers will compete in the tournament May 13-15 at the University of Texas Golf Club, a par 71 layout that is 7,412 yards in length.   The top five schools in the 14-team field will advance to the NCAA national Tournament at The Blessings in Fayetteville, Arkansas, May 24-29.

This marks the second consecutive year the Tigers have been sent to Texas for the NCAA Regional.  Last year the Tigers finished second at the Bryan Regional at Texas A&M.

The host school Texas Longhorns are the number-one seed at the Austin Regional.  Southern Cal, ranked 10th in the nation by Golfweek, is the number-two seed, followed by three-seed and 16th ranked Pepperdine.  The Tigers are the fourth seed and TCU is the number-five.   Other teams at the Austin Regional are Arkansas (6), Iowa (7), Marquette (8), San Jose State (9), St. Mary’s (10), Sam Houston State (11), UMBC (12), Prairie View (13) and Army (14).

This is Clemson’s 38th straight year in the NCAA Tournament, the 36th in a row under Penley.  The Clemson mentor has the longest running streak of NCAA appearances among active coaches, and Clemson’s 38-year program streak is second behind Oklahoma State.  Penley has won seven NCAA Regional tournaments, more than any other coach.

Clemson has advanced to the NCAA National Tournament each of the last four years, one of 10 schools that can make that claim.   Clemson has reached the NCAA Finals 28 times under Penley and 30 times overall.   The Clemson graduate is in his 36th season, tied with former baseball coach Bill Wilhelm for the most years serving as a head  coach of any Clemson sport. 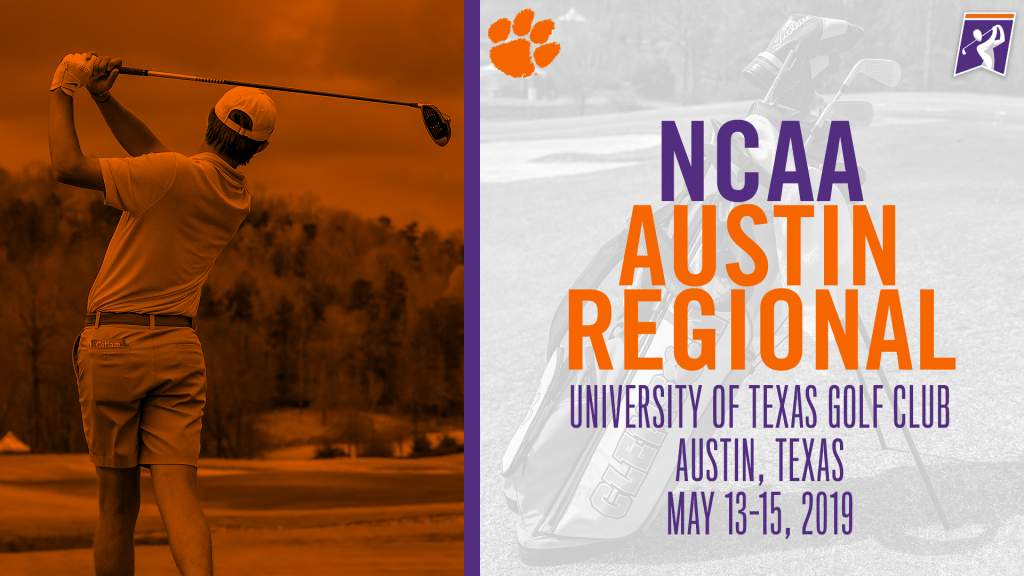 The Tigers are led by four-year starter and All-American Bryson Nimmer.  The native of Bluffton, S.C. has a 68.97 stroke average, on pace to be the best in Clemson history for a single season.  He has nine top 10 finishes in his 10 tournaments this year, including a school record four victories and three other top three finishes.  One more top 10 will tie the school record.  He is coming off a third-place finish at the ACC Tournament, his fourth straight top 10 at an ACC or NCAA Tournament.

The second generation Tiger golfer already has set the school record for rounds in the 60s in a season with 18 and has 44 for his career, just one short of D.J. Trahan’s school record of 45 set between 2000-03.  The Ben Hogan Award candidate is the highest ranked ACC player according to Golfweek with a #5 national rating.

Jacob Bridgeman has the second best stroke average at 71.37.  The freshman from Inman, SC has four top 10 finishes, 12 rounds in the 60s and 15 under-par rounds.    He had four straight top 10 finishes in the middle of the season.  He was Clemson’s second best golfer at the Clemson Invitational in April when he shot an eight-under-par 208 in finishing 14th.

Kyle Cottam is third on the team in stroke average at 72.76.  The sophomore gained considerable NCAA Tournament experience last year at the regional and national levels.  He is coming off a #24 finish at the ACC Tournament two weeks ago when he shot one-under-par 215.

The NCAA adopted a substitution rule for the NCAA Tournament last year, so more than five players could see action at the regional.

Clemson is ranked 19th by Golfstat and 21st by Golfweek entering the NCAA Tournament. The Tigers have one team victory, a co-championship at the Jack Nicklaus Match Play in Dublin, Ohio, last fall.  Clemson has played in 11 tournaments this year as a team and has seven top four finishes.    Clemson’s top finish in a stroke play tournament is a second place at the Golf Club of Georgia Collegiate back in October.