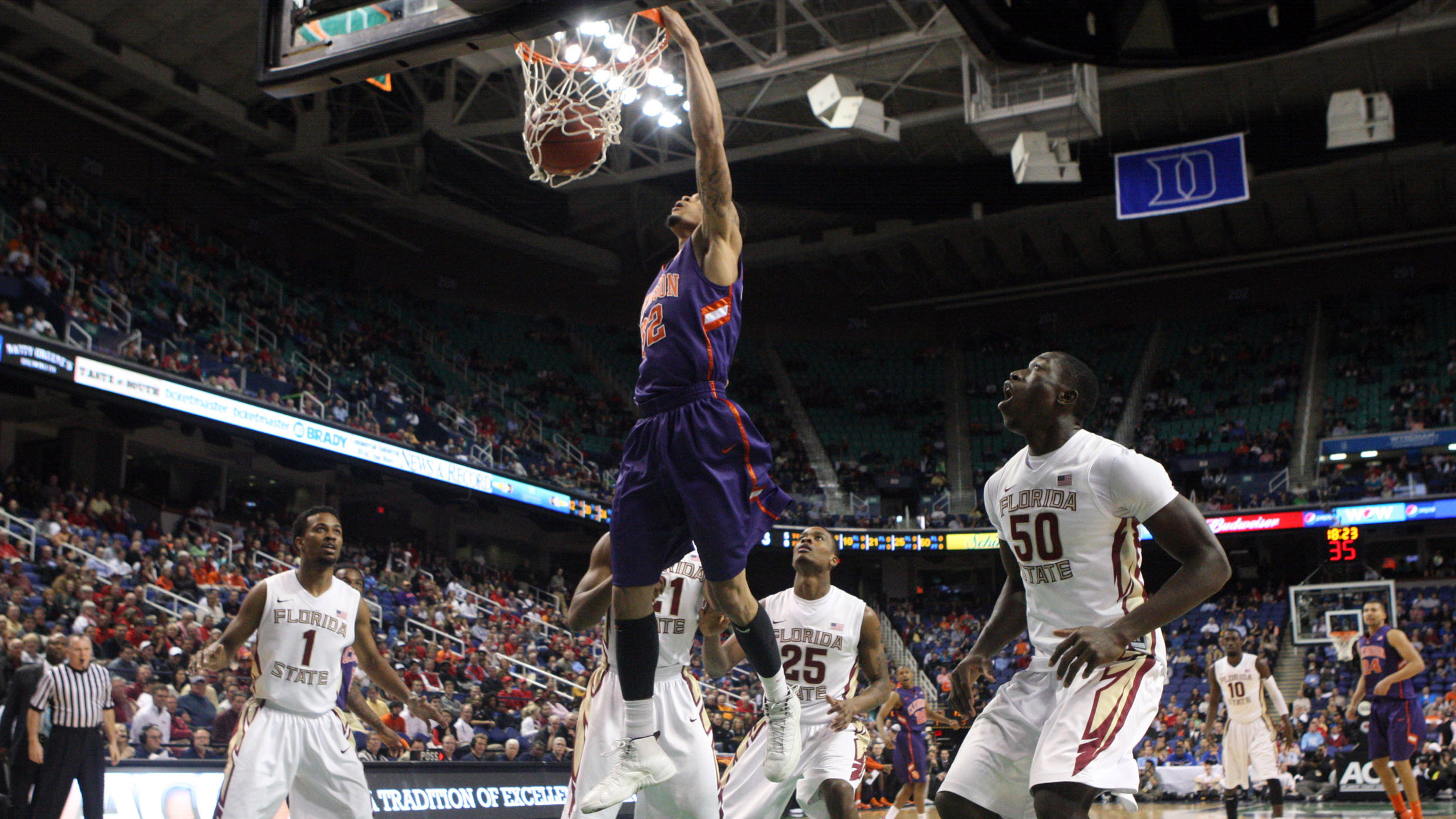 GREENSBORO, NC – Florida State utilized a 17-5 run midway through the second half on its way to a 73-69 victory over Clemson on Thursday in the opening round of the ACC Tournament at Greensboro Coliseum. The Tigers, down by as much as 14 in the second half, battled to within two late only to see the Seminoles seal it from the free throw line. Clemson closed the season with a 13-18 record. Florida State improved to 18-14 overall and will play No. 3 seed North Carolina on Friday evening. All three Seminole wins were by five or less against the Tigers.Three Tiger players scored double figures, led by freshman Jordan Roper who had 18. He made 3-of-3 behind the arc and 9-for-13 from the free throw stripe. K.J. McDaniels had 16 points, several in spectacular fashion, in 29 minutes of play before fouling out. Devin Booker added 11 in his final game as a Tiger. Clemson shot 41 percent for the game, but made 8-of-17 (.471) from long distance. The Tigers out-rebounded the Seminoles 32-28, but were guilty of eight second-half turnovers and 11 for the game. Florida State shot 49 percent overall and converted 24-of-32 (.750) at the line. Conversely, Clemson was just 19-of-31 (.613) on free throws.Roper’s second trifecta gave the Tigers a 12-6 edge with 13:24 to go, prompting a Leonard Hamilton timeout. But following a steal one possession later, Roper missed a wide open layup which led to a three-point play on the other end for the Seminoles’ Montay Brandon. The edge stretched to 10 on a three by McDaniels with 7:45 left, and again moments later on a runout layup by Booker.McDaniels provided back-to-back highlights in the final minutes of the opening half. With 7-foot-3 Boris Bojanovsky right under the basket for a layup, the 6-foot-6 McDaniels rose up for the blocked shot. He then followed for his second left-handed tip dunk of the half to put Clemson ahead 34-24 at the under-four timeout.McDaniels drew his second foul on the next possession, and FSU took advantage with a 6-0 run to cut the deficit to just five at half, 35-30.Just like the Jan. 24 meeting in Tallahassee, FSU got Clemson’s best players in foul trouble. Booker, Jennings and McDaniels all picked up their third fouls by the 15-minute mark of the second half as the Seminoles built a two-point lead at 43-41. But McDaniels again had an answer on a spinning dunk and free throw with under 10 to play, giving the Tigers their last lead at 46-45. From that point, the ‘Noles put together the 17-5 run to put the game out of reach.Terrance Shannon scored on a putback with seven minutes left, and then hit two free throws to push the edge to six. The lead reached double figures behind the play of Okaro White, who took it to Clemson inside and scored seven straight to make the lead 60-49 at one point. Clemson battled back to within two at 71-69 on Booker’s second three-pointer of the season, but Michael Snaer iced the game with a pair at the line with 6.9 seconds left.White led all players with 24 points, a career-high for the junior. Snaer had just 10 for FSU on 3-of-10 shooting, but Devon Bookert and Terrance Shannon scored 12 apiece in a supporting role.