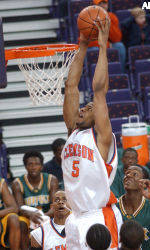 Clemson (6-1) improved to 15-1 all-time against teams from the Mid-Eastern Athletic Conference. And Ford was a big reason why.

The senior forward hit 8 of 12 shots from the field and had six rebounds. Akingbala was 7 of 12 from the field. Shawan Robinson was the only other Tiger in double figures with 10 points.

Norfolk State (3-4) was led by Chakowby Hicks with 16 points and Karandick Ogunride and Calvin Brown with 10 points apiece.

Clemson started slowly in this one, trailing 12-9 with just over five minutes gone in the game. But the Tigers took off on runs of 21-1 and 11-2 to put the game away. Ford led way with a three-point play and two dunks during the first stretch.

Clemson also got the benefit at the foul line, shooting 20 more free throws than the Spartans and outscoring them by 14 points at the line (24 to 10.)

The Tigers take on The Citadel on Friday night at Littlejohn Coliseum. Then they leave for Hawaii to take part in the Rainbow Classic.