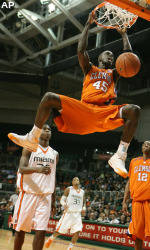 CORAL GABLES, Fla. (AP) — A couple of spurts was all No. 25 Clemson needed to keep its unbeaten record intact.

K.C. Rivers scored 28 points and the Tigers easily overcame an early 12-point deficit on the way to beating mistake-prone Miami 91-72 Sunday night in the Atlantic Coast Conference opener for both teams.

Clemson used a 16-0 run over a 2 1/2-minute stretch of the first half to take the lead for good. And after Miami clawed within 52-47, the Tigers — on a 3-pointer by Oglesby, then 3’s on consecutive possessions by Rivers — scored nine straight points in a 2-minute span of the second half to put the Hurricanes away.

“I thought our guys came in with the proper mind-set that you have to have when you’re going on the road, in league, against a good team,” Clemson coach Oliver Purnell said. “You’ve got to be prepared to take their initial blow in the beginning of the game … but I thought our guys really settled down and showed great poise.”

The Tigers happily cashed in on plenty of Miami miscues, too.

Jack McClinton scored 20 points for Miami (7-3, 0-1), which doomed itself with a season-high 22 turnovers–12 in the final 11 minutes of the first half, a stretch where the Hurricanes were outscored 29-9–and by missing 12 of its first 17 free throws.

“Obviously, that was a butt-whuppin’,” Miami coach Frank Haith said. “Those guys gave it to us. They were tougher than we were. Mentally we weren’t tough. Missed free throws, turning the ball over, that was the difference in the game.”

Demontez Stitt scored 10 points and Trevor Booker grabbed a game-high 16 rebounds for Clemson, which improved to 44-0 in games played before Dec. 22 over the past four years.

Cyrus McGowan scored 11 points, while Dwayne Collins and Brian Asbury each had 10 for the Hurricanes, which gave up a season-high in points–and doing so at home was especially upsetting to Haith.

“No way that should happen,” Haith said.

Miami ran out to a quick start, with McGowan making his first four shots to fuel a 21-9 burst over the first 9 minutes. It matched the largest deficit Clemson faced at any point this year.

Just like that, Clemson outscored Miami 16-0 over a 2 1/2 -minute spurt, its biggest run of consecutive points so far this season. David Potter scored all seven of his points during the run, Rivers added five and Booker had the other four, putting Clemson on top 25-21–and the Tigers wouldn’t trail again.

“We’ve still got a long road ahead of us, but this is just the start of our journey,” Rivers said. “This team here is capable of doing good things and I think we will do good things down the road.”

Miami was down 38-30 at intermission, then saw the deficit swell to 11 early in the second half before making a comeback try. McClinton had assists for easy layups on consecutive possessions, first to Collins and then Asbury, to bring Miami within 52-46 with 13:12 remaining.

But Clemson, which did the majority of its scoring by attacking the rim in the first half, used the long ball to snuff out the Hurricanes’ rally.

He pumped both fists, and almost on cue, the majority of the Miami faithful began heading for the exits.

“We turned the ball over badly and you can’t win games when you turn the ball over,” McClinton said. “We’ve got to learn from it. That’s all we can do.”