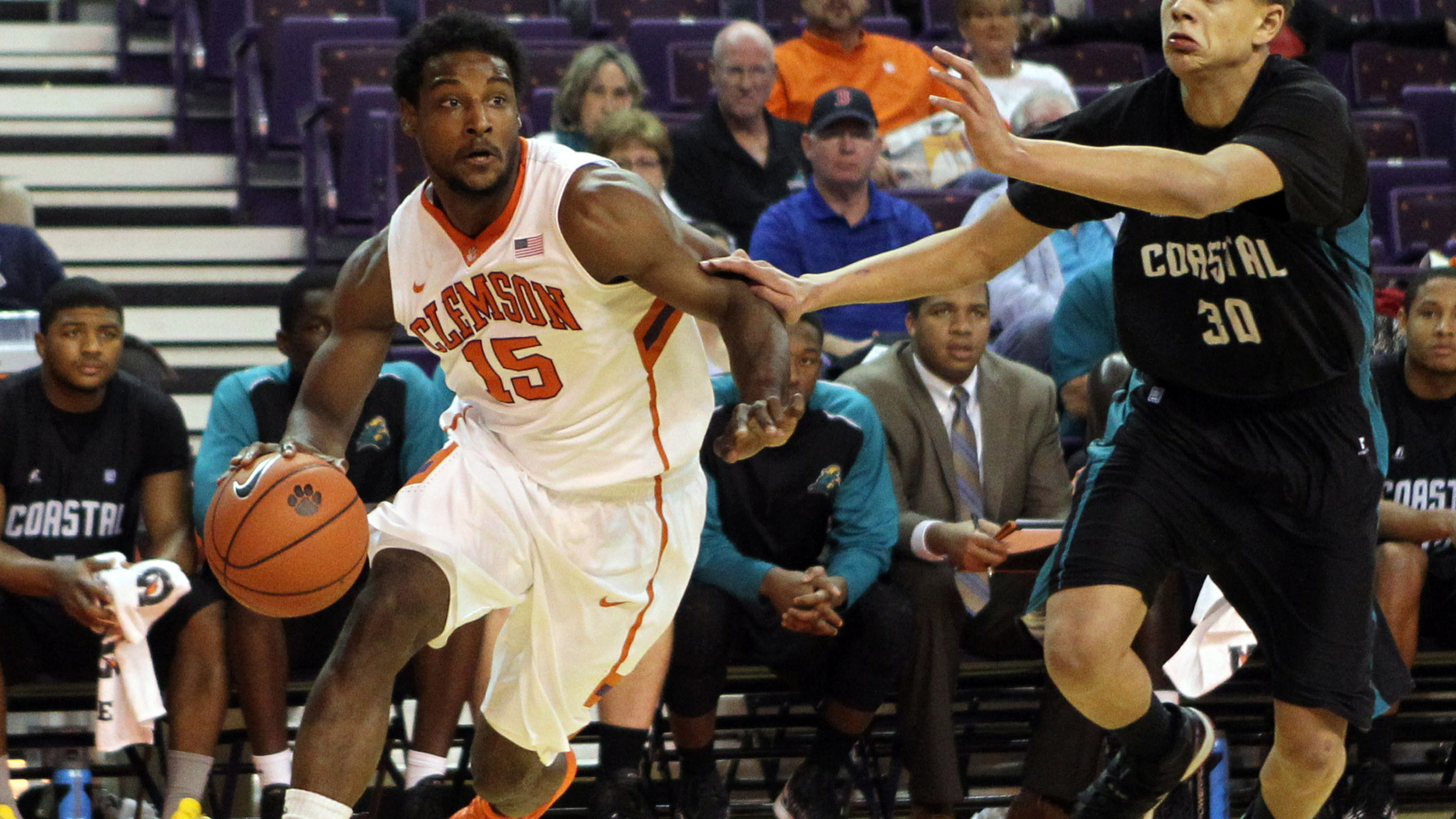 CLEMSON, SC – Clemson scored the first 13 points Friday on its way to a 69-40 victory over Coastal Carolina on Friday at Littlejohn Coliseum. With the win, the Tigers improved to 6-1 on the season. Coastal fell to 2-5 with the loss. Clemson broke Coastal Carolina’s two-game winning streak in the series with the win.

K.J. McDaniels led the way for the Tigers, with a career-best tying 22 points. Devin Coleman reached double figures a second straight outing. The red-shirt sophomore made 5-of-10 shots and finished with 14 points. Adonis Filer added nine points off the bench in 19 minutes. Clemson played without one of its top scorers, Jordan Roper, who suffered a mild concussion in the team’s previous game against UMass.

The Tigers shot 43.4 percent, including a 50 percent mark after halftime. Coastal struggled to just 28.3 percent shooting, as Clemson Hall of Famer Cliff Ellis’ team scored just 19 points in the second half against the stiff Tiger defense. As a team, Clemson was solid from the free throw line (.714) and owned the glass with a 46-27 advantage over the Chanticleers.

Coastal came up empty on its first 13 possessions Friday, as Clemson built its 13-0 lead. The Chants finally broke the ice with a long jumper by Josh Cameron at the 10:35 mark. The lead grew to 19-2 behind consecutive threes by Devin Coleman and Filer. The sophomore from Chicago extended the lead to 17 again just in front of the four-minute mark on his third long-range dagger.

The Tigers’ lead stretched to as much as 20 in the opening frame, but Coastal scored the final eight points of the half to pull within 12 at 33-21. Wilson scored on a three-point play with 1.7 seconds before the break to give Coastal full momentum.

The run pushed to 10-0 in favor of Coastal before Clemson finally stopped the bleeding on a pair of Coleman free throws. Clemson surged ahead again to 46-27 after Coleman and McDaniels knocked in a pair of long jumpers. McDaniels brought the crowd to its feet at the 5:52 mark when, he caught a pass underneath the basket and in one motion, rose up for a dunk to make it 56-35. From that point, the Tigers had the win safely in hand.

Elijah Wilson led Coastal Carolina with 16 points, but had just two in the second half. Josh Cameron added 10 for the Chants, who shot just 2-of-15 from three-point distance.

The Tigers stay at home for their next contest, a Tuesday, Dec. 3 tilt with SC State. The game will tip off at 7 p.m. from Littlejohn.