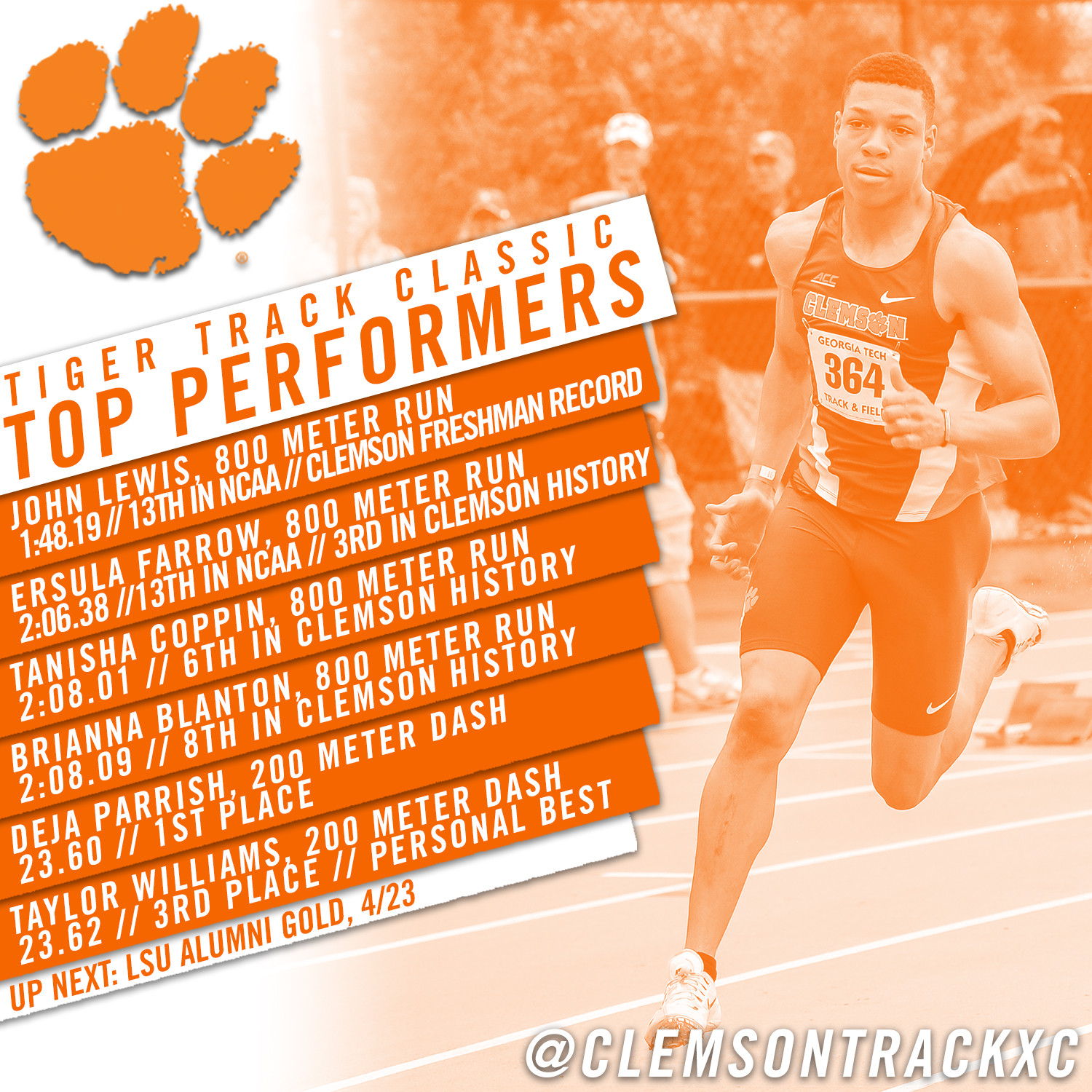 AUBURN, Ala. – All eyes were drawn towards a couple of Clemson freshmen today in the Tiger Track Classic hosted by Auburn. John Lewis and Ersula Farrow each turned in the best 800 meter races of their young collegiate careers to rewrite Clemson history and establish themselves as two of the top mid-distance runners in the country. Overall the Tigers turned in 24 personal bests on Saturday alone.

“John had an outstanding personal best running his first outdoor 800 for us,” head coach Mark Elliott said. “The women’s 800 also performed great; they are really coming into their own at the right time. I also thought Taylor Williams had a great run today with a lifetime personal best in the 200, finishing right behind Deja (Parrish).”

Lewis ran a career best 1:48.19 to take second overall in the event and claim Clemson’s outdoor freshman record in the 800 meter run. The time currently ranks him 13th in the nation and fourth in Clemson history. The freshman enjoyed similar success during his indoor campaign, claiming the second fastest time in Clemson history in the event as well as the freshman indoor record. Overall the event was a successful one for Clemson as five Tigers ran personal bests in the race.

Farrow nearly mimicked Lewis in the women’s 800 meter run with her two-second personal best 2:06.38. The time placed her third overall, places her 13th in the country and seats her third on Clemson’s all-time list of top performances in the event. Her previous personal best of 2:08.63 during the indoor season has her eighth in Clemson history.

Not far off from Farrow, Tanisha Coppin and Brianna Blanton bettered their position on Clemson’s all-time list of top performances in the women’s 800 meter run as well. Coppin is now sixth all-time with her fifth place time of 2:08.01. Blanton continues to bring her best each week as she used her personal best to climb to eighth all-time with her sixth place effort of 2:08.09.

In the men’s 200 meter dash, Jeffrey Green took seventh at 21.35 and then came back to anchor the first place 4×400 meter relay team. Michael Cheeks, Cordell Lamb, Lewis and Green all combined for a time of 3:07.36. Lamb and Cheeks also teamed up with Tevin Hester and Justin Johnson to begin the meet with a third place effort in the 4×100 meter relay with Cheeks crossing the finish line at 41.05. Johnson later took third with a time of 13.96 in the men’s 110 meter hurdles.

Markeeta Thomas, Coppin, Farrow and James all ran the meet’s fastest 4×400 meter relay time as well, combining for a 3:38.34.

In longer distances, both Katie Fortner and Cameron Thornton took sixth in the 1,500 meter run. Fortner ran a personal best 4:34.77 while Thornton crossed the finish line at 3:53.23 with five personal best efforts from Tigers behind him.