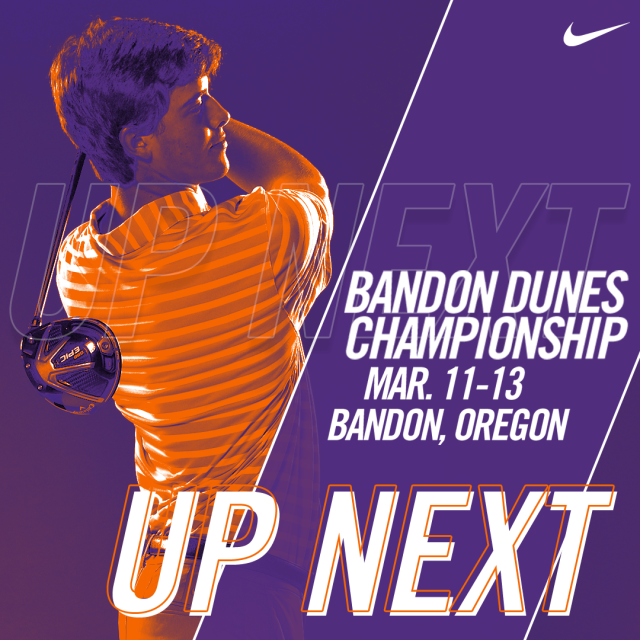 Clemson Returns to the Far West

Clemson, S.C.— Clemson heads to the Far West for its second tournament of the spring season this weekend. Larry Penley’s Tigers will be among 14 teams in the field for the Bandon Dunes Championship at Bandon Country Club in Bandon, Oregon. The tournament 54-hole tournament will be held Sunday, March 11 through Tuesday, March 13.

Clemson is coming off its first tournament victory of the year, as the Tigers won the Puerto Rico Classic on Feb. 20th. It was the 75th career victory for Penley, who has been Clemson’s head coach since the fall of 1983.

Clemson is ranked 14th by Golfweek and 16th by Golfstat in polls that have been released since Clemson won in Puerto Rico.

This will be Clemson’s only tournament in the month of March. Clemson’s schedule will be hectic in April when the Tigers play three tournaments in 16 days.

Clemson’s lineup for Oregon includes Bryson Nimmer, who had a top five finish in helping the Tigers win the Bandon Dunes Championship in 2016, his freshman year. Nimmer has a 70.27 stroke average and is the No. 21 ranked player in the nation according to Golfweek.

Turk Pettit was Clemson’s top player in Puerto Rico where his 208 score for 54 holes ranked second in the field of 75 golfers. The freshman from Auburn, Ala. has a 70.80 stroke average this year and is ranked 46th in the nation according to Golfweek.

With Redman’s absence, freshmen Colby Patton and Kyle Cottam move up in the lineup. Patton has a 71.83 stroke average and is coming off a seventh place finish in Puerto Rico where he fired an even par score of 213 for the 54 holes. Cottam, who finished third at Trinity Forest back in the fall, has a 72.53 stroke average.

William Nottingham, a starter last year and the Clemson record holder with a 62 at he Wolfpack Spring Open last year, will be in the Clemson lineup in Oregon. The native of Tennessee has a 7400 stroke average this year.