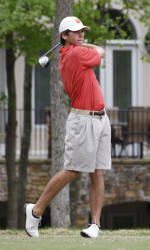 Clemson, SC – Clemson will take three freshmen to the Brickyard Collegiate in Macon, GA this weekend. The competition in the 15-team tournament at The Brickyard Golf Club will take place over three days, October 10-12. Clemson finished third in the field of 15 teams last year, but just one of the five players in Clemson’s 2008 lineup, will be making the trip this weekend.

That one player is veteran Ben Martin, the senior leader of the Clemson team. Martin, who reached the finals of the 2009 US Amateur in August, started his final season with the Tigers with a top 10 at the Carpet Classic in Dalton, GA last month. The native of Greenwood, SC, had a 214 total to finish ninth individually.

Luke Hopkins (Greer, SC) will also be in the Clemson lineup this weekend. Burger is a sophomore who finished 33rd at the Carpet Classic with a 222 score. He shot under par in two of his three rounds, including a 69 in the final round that was the best individual round by a Clemson golfer at the tournament. Hopkins is looking to rebound after a 228 score in the season opener.

Will Ovenden (Spartanburg, SC) are two first-year freshmen who will be in the Clemson lineup at The Brickyard. Reeves had a 236 score at the Carpet Classic in his first career event, but the South Carolina Match Play Champion played well in team qualifying for the Brickyard with a pair of scores in the 60s. Ovenden will be playing his first career event for the Tigers.

Corbin Mills, another freshman from Anderson, SC , also will compete in the tournament as an individual.

Fans can follow the scores each day on golfstat.com.