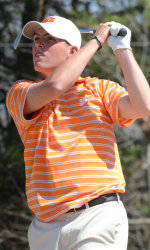 CLEMSON, SC – Crawford Reeves will play his first tournament of the year when the Clemson golf team takes the golf course Feb. 19 at the Rio Mar Country Club in San Juan, Puerto Rico. Reeves missed the entire fall schedule while recovering from a back injury. But, after finishing 32nd in a strong national field at the Jones Cup Amateur Feb. 3-5, he is ready to rejoin his Clemson teammates for his junior season.

Clemson finished the fall with a number-15 national ranking without Reeves in the lineup, so there is reason for optimism for Larry Penley’s 29th Clemson team with his return. The Tigers will start one senior, two juniors, a sophomore and a freshman in the 15-team tournament that will run Feb. 19-21.

The event features 10 of the top 20 teams in the nation, including Alabama, Oklahoma State, Georgia and Georgia Tech. North Carolina, NC State and Virginia Tech are other ACC squads in the field.

Corbin Mills had a 71.00 stroke average for the fall schedule, best in the Atlantic Coast Conference. He won the prestigious Jerry Pate Intercollegiate with a 201 score, tied for the lowest 54-hole score in Clemson history. He also finished 11th at the Carpet Classic and the US Collegiate.

Mills has had quite a run over the last eight months. He won the United States Public Links in July and with that win came an invitation to the 2012 Masters. He won the Players Amateur the next week, gaining an invitation to the 2012 Heritage on the PGA Tour as well. He is ranked in the top 10 in both the United States Amateur rankings and the Sagarin Golfstat rankings.

McCuen Elmore had his best fall as a Tiger with a 72.33 stroke average for four tournaments and 12 rounds. He had four rounds under par and two more at par. He had three top 13 finishes including a team best eighth place at the Carpet Classic.

Billy Kennerly had a 73.67 stroke average for the fall. The freshman from Georgia played in all 12 rounds and his score counted 10 of the 12 rounds. He had Clemson’s best round of the day twice and was Clemson’s top golfer with a 15th place finish at the Bank of Tennessee Classic.

Thomas Bradshaw will be the fifth starter. The sophomore was Clemson’s top player at the Jones Cup three weeks ago with a 15th place finish.