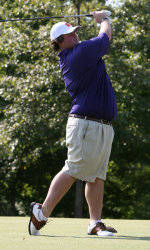 Clemson Returns to Course on Sunday

CLEMSON, SC – Clemson’s golf team will return to the course Sunday at the Puerto Rico Classic in Rio Mar, Puerto Rico. The 54-hole event will run Sunday through Tuesday, Feb. 20-22 at the Rio Mar Country Club.

The Tigers will take three sophomores and two juniors to Puerto Rico for the tournament that will be held on the par 72 course. Leading the way is sophomore Corbin Mills, who has a 73.75 stroke average for his four tournaments. He is coming off a third-place finish at the Jacksonville Invitational at Sawgrass when he had a 214 score. Mills finished 11th at the Puerto Rico Classic last year, helping the Tigers to a third-place team finish.

Jacob Burger, a junior from Orangeburg, SC is Clemson’s second best golfer in terms of stroke average. He has a 74.83 figure for four tournaments, including a fifth-place finish at the Carpet Classic in September. He had a solid 14th place at the Jacksonville Invitational.

Mike Muscatell will be in the Clemson lineup for the second time this year. He played at The Brickyard where he shot a 227 score for his three rounds. He started that event with a strong 71, his career best round.

This will be the 19th consecutive year Clemson has played in the Puerto Rico Classic. Clemson has won the event just once, in 1999 behind current PGA Tour players Lucas Glover and Jonathan Byrd. The Tigers have finished second or third eight times, including last year.