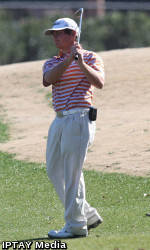 Clemson Returns to Course on Monday

CLEMSON, SC – Clemson returns to action at the USCA Cleveland Classic on Monday, March 5. The 15th annual event will be held at the Palmetto Country Club in Aiken, SC and will feature 18 teams from the SEC, ACC, Southern Conference and Big South. USC-Aiken will serve as the host school.

Clemson is the highest ranked team in the field that also includes ACC teams Maryland and Virginia and SEC teams Vanderbilt and South Carolina. Clemson is ranked 13th by Golfstat and 14th by the Golf World coaches poll. The 18 teams will play 36 holes on Monday and 18 on Tuesday.

The event will be held on the par 70 Palmetto Club course that is 6,617 yards in length. Alabama is the defending champion, as they were led by current PGA Tour player Bud Cauley. Clemson finished sixth last year with an 868 score as Crawford Reeves led the way with a 212 score, good enough for fifth place. Jacob Burger was 11th with a 214.

The Tigers are coming off an outstanding second place finish in a national field of 15 teams at the Puerto Rico Classic Feb. 19-21. Thomas Bradshaw, Clemson’s number-five player, led the way with a 212 score, four under par. He finished sixth, while freshman Billy Kennerly finished seventh at 213. Corbin Mills was a third Tiger under par with a 214 score, good enough for 14th position.

Mills is Clemson’s top ranked player as he is rated as the 12th best player in the nation according to the Golfweek/Sagarin rankings. He is also ranked in the top 10 in the United States Amateur rankings. So far this year Mills has a 71.13 stroke average, best on the Clemson team and third best in the ACC.

McCuen Elmore is second on the team in stroke average with a 72.33 average. He has eight rounds at par or better already this year and his best performance was an eighth place at the Carpet Classic in Dalton, GA in the first tournament of the year.

Crawford Reeves made his 2012 debut at the Puerto Rico Classic and had a solid performance with a top 25 finish. As stated above he was Clemson’s best player on this course last year.

Billy Kennerly also will be in the Clemson lineup. The freshman from Alpharetta, GA has a 73.13 stroke average for five events. He had his first career top 10 when he finished seventh at the Puerto Rico Classic last month.

Clemson’s best player in Puerto Rico was Thomas Bradshaw with a four under par score of 212, including a pair of rounds in the 60s, the only Tiger to do that. Bradshaw has a 74.67 stroke average for the year and has three rounds in the 60s out of his 12 total rounds.

Fans can follow the progress of the tournament on golfstat.com.