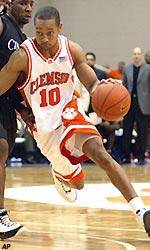 ANDERSON, S.C. – Edward Scott scored all of his 20 points in the second half as Clemson continued its best start in seven seasons with a 58-51 victory over Cincinnati on Sunday.

The Tigers have not opened 7-0 since the 1995-96 season. Few thought they would this time after the Bearcats surprised fifth-ranked Oregon 77-52 in the Jimmy V Classic on Tuesday night.

But this was not the same hot-shooting Cincinnati (5-3) who looked poised to move into the rankings with a victory here.

Tony Bobbitt, who more than doubled his season points total with 29 against the Ducks, had only 10 against Clemson. The Bearcats shot 34.6 percent (19-of-55) for the game and after holding Scott scoreless for 20 minutes, no one could stop him down the stretch.

Scott began his run when he was fouled on a reverse layup early in the half and finished the three-point play as the Tigers led 33-25. His first 3-pointer four minutes later made it 40-32. When Cincinnati cut the lead to 40-38 with 9:59 left, Scott followed with a long 3-pointer.

And after Jason Maxiell made two jumpers to tie the game at 47-all, Scott’s drive put the Tigers ahead for good.

Scott scored the nine of the Tigers’ final 11 points to secure the team’s biggest victory in four years. He went 0-for-7 in the first half then hit seven of 11 shots the rest of the way.

Chey Christie had 12 points and Olu Babalola 11 for Clemson.

Leonard Stokes had 15 points to lead Cincinnati, but shot 5-of-16 from the field.

Nothing Cincinnati tried worked. Early in the second half, coach Bob Huggins yelled at Bobbitt to get more active. But with Scott tracking him most of the game, that was difficult. Bobbitt finished 4-of-11 overall and made only one of his four three-point attempts.