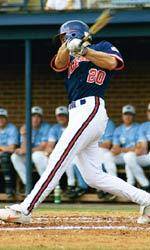 Clemson Remains #1 in All Three Polls

Clemson (34-5, 10-2 ACC) remains atop all three baseball polls this week after a 4-1 week, including a three-game sweep at Duke. It is the fifth straight week being ranked #1 by at least one poll and fourth straight week being ranked #1 by all three polls. It also marks the first time in history that the Tigers have been ranked #1 five times in a row by a certain poll, as Collegiate Baseball and ESPN/Baseball Weekly have now tabbed the Tigers #1 for five consecutive weeks. Clemson was ranked #1 by Collegiate Baseball for four straight weeks in 1994. Clemson will face #5 South Carolina Wednesday in Columbia and play host to #3 Wake Forest this weekend along with a Tuesday matchup with Furman.