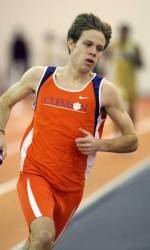 BLACKSBURG, VA – Clemson broke a school record in the women’s distance medley relay that had stood since 1994 to highlight the final day of action at the Virginia Tech Invitational. The Tigers won that event, as well as the other three relays held on Saturday at the Hokies’ Rector Field House.

The Tigers’ distance medley relay consisted of Alyssa Kulik, Brianna Blanton, Taylor Miller and Kim Ruck. The group produced a winning time of 11:44.33, easily surpassing the Clemson record of 11:48.46 set in 1994. The two senior leaders bookended the group that was comprised of two freshmen – Blanton on the 400-meter leg and Miller in the 800.

The women’s 4×400-meter relay was victorious on Saturday in the final competition. The A team of Keni Harrison, Brianna Rollins, Nia Fluker and Marlena Wesh were fast for the Tigers considering it was only the second meet of the indoor season. The group posted a time of 3:37.58, just over two seconds under the NCAA qualifying standard.

Lauren Terstappen tied for second in the women’s pole vault. The sophomore out of Phoenixville, PA cleared the bar at 12’9.5″.

The Clemson men also won both relays on Saturday at Rector Field House. The group of La’Mont Jackson recorded a time of 3:13.11 to defeat the competition.

Chris Slate won the 800 on Saturday. The senior out of Delaware put together a finishing time of 1:53.76 to outlast his section and pace the field of 20 runners.

Jameel Abdul-Mateen was Clemson’s highest finisher in seventh place. He connected on a leap of 23’9″.

In the throws, newcomer Marcus Brown was runner-up in the shot put. He just transferred in mid-year from Maryland-Eastern Shore and in his first collegiate competition for the Tigers, hit a mark of 55’7″ to enter the top 10 of Clemson’s record books. Cory Thalheimer was fourth in the event for Clemson with a shot put of 53’1″.

The Tigers return to action on Saturday, Jan. 21 to take part in the Auburn Invitational in Birmingham, AL.