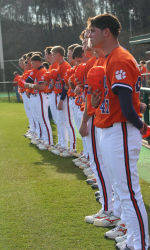 Number-one seed Clemson will play host to number-four seed UNC Asheville in the first round of the NCAA Clemson Regional on Friday night at 7:00 PM. Second seed Elon and #3 seed Mississippi State will open the regional with a 3:00 PM (eastern time) game at Clemson’s Doug Kingsmore Stadium.

The NCAA announced first round pairings for 16 regional sites on Monday afternoon. The Clemson Regional will be played June 2-5. There will be two games a day Friday June 2 through Sunday June 4 with the games beginning at 3:00 PM and 7:00 PM each day. If a seventh game is necessary to crown a regional champion it will be played Monday night at 7:00 PM.

Clemson enters the NCAA Tournament with a 47-14 record. The Tigers have won 19 of their last 20 games, the best 20-game streak entering the NCAA Tournament in school history. Jack Leggett’s Tigers won the ACC Tournament for the first time since 1994 when they defeated NC State, 8-4 in the finals last Sunday. Clemson also won the ACC regular season crown with a 24-6 record and it marked just the third time since 1981 that Clemson won both the regular season and the tournament championships in the same year.

Clemson is the number-one seed in the entire tournament for the first time. Clemson was ranked number-one in the nation in all three polls entering the 1994 tournament, but the NCAA Tournament committee did list national seeds prior to the tournament until 1999.

The current Clemson team is led by Tyler Colvin, the ACC Tournament MVP. Colvin is hitting .360 with 12 home runs, 21 doubles and 63 RBIs. Colvin enters the tournament with a 20-game hitting streak, and also leads the team in stolen bases with 21. First-team All-ACC first baseman Andy D’Alessio leads the ACC in home runs (20) and RBIs (75). Starting centerfielder Brad Chalk is hitting .350 for the season, including a .474 batting average in the ACC Tournament. He also is a perfect 17-17 in terms of stolen bases this year.

Clemson’s has three top starting pitchers in Stephen Faris (8-2), Jason Berken (9-3) and Josh Cribb (9-0) who are a combined 26-5 so far this year. All three have been at least first or second team All-ACC at some point in their careers, including Cribb’s first-team selection this year. As dominant as they have been, Clemson won the ACC Tournament without any of the three gaining a victory in the five games Clemson played in Jacksonville. Sean Clark pitched the championship game and allowed just one run in eight innings.

UNC Asheville enters the tournament with a 28-33 record. The two teams have not met since 2002 when Clemson won at Kingsmore Stadium by a 23-5 score. That was also the last year Clemson advanced to the College World Series. This will be UNC Asheville’s first ever appearance in the NCAA Tournament. They qualified by winning the Big South Tournament on May 27 with a 16-11 victory over Liberty. They trailed by 10 runs at one point in that game.

While the two teams did not play this year, they do have common opponents in Furman, Florida State, Western Carolina, Winthrop, Gardner Webb and Duke.

The Bulldogs are led offensively by Elliott Arrington who has a .349 batting average with seven home runs and 46 RBIs. Rob Vernon is a .339 hitter, while Kevin Mattison has a team best eight home runs and a team best 13 stolen bases.

Number-two seed Elon enters the tournament with a 44-16 record. This will be Elon’s second trip to Clemson this year as they lost a pair of close games at Kingsmore Stadium against the Tigers March 21-22. Clemson won the first game 5-3 and the second game 7-4.

Third seed Mississippi State enters the tournament with a 35-21 record, including an 18-game winning streak early in the season. Coach Ron Polk’s team is the number-three seed and will be making its first trip to Clemson since 2000 when they faced the Tigers in the Super Regional. Clemson won that Super Regional in two games. Clemson traveled to Starkville, MS for a regional in 1992, but Clemson never faced Mississippi State in that six-team regional.

First round pairings and schedule for 2006 Clemson Regional