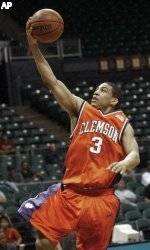 HONOLULU (AP) – Akin Akingbala scored 13 points and Vernon Hamilton added 11 as Clemson routed Indiana State 83-57 in the consolation round of the Rainbow Classic on Wednesday afternoon.

Clemson’s defense forced the Sycamores into an 18-of-59 (30 percent) shooting performance from the field and 22 turnovers.

The Clemson post players also dominated the inside against the smaller Sycamores, especially after Indiana State post player Jerod Adler picked up his fourth foul less than two minutes into the second half.

Mick Yelovich came off the bench to score 15 points to lead the Sycamores, while David Moss added 12.

The Tigers went on a 12-0 run midway through the first half to take control of the game and cruised to a 44-24 halftime lead.