CLEMSON, S.C. — Following a 2-0 start to the season, Clemson’s men’s soccer team is ranked No. 4 in this weeks United Soccer Coaches poll. The Tigers were previously the sixth ranked squad in the nation, and did receive one first place vote.

Clemson joins Pittsburgh as the two ACC teams in the top-5.  North Carolina and Virginia Tech round out the conference’s representation in the top-10 at six and ten, respectively.

The Tigers will look to improve upon their 2-0 record on Friday when they host in-state rival South Carolina (1-1) at Historic Riggs Field. Kickoff for that match is set for 7 p.m., and the battle between Palmetto State foes will be broadcast on ACCNX

For all of the most up-to-date information regarding Clemson men’s soccer, be sure to reference clemsontigers.com and follow @ClemsonMSoccer on Twitter. 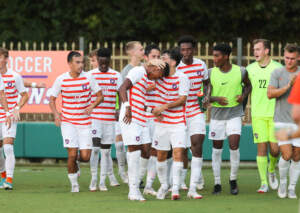