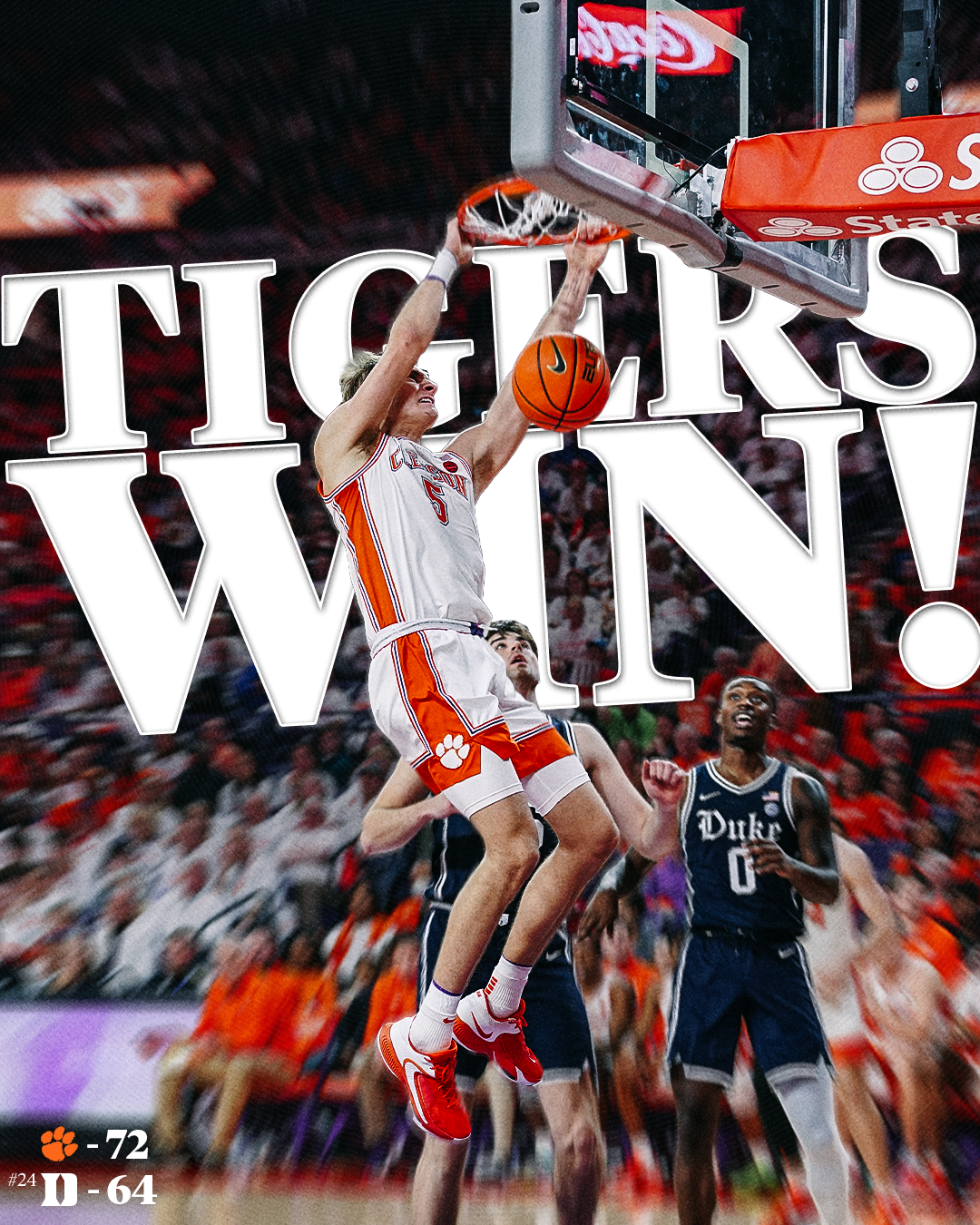 The Tigers (15-3, 7-0 ACC) were led by PJ Hall (Spartanburg, S.C./Dorman) who scored a season-high 26 points. Hall scored 18 of his 26 points in the first half and connected on 10 of his 16 field goal attempts, while adding four rebounds to his stat line.

Brevin Galloway (Anderson, S.C./Seneca) netted a season-high 17 points which included a massive 3-point play along with a timely 3-pointer to give the Tigers momentum late in the second half.

The unsung hero of the night for the Tigers was Ian Schieffelin (Loganville, Ga./Grayson) who was everywhere for the Tigers. Schieffelin recorded six points, eight rebounds, and a season-high six assists. Schieffelin put himself in great defensive positions all night long and drew three charges against the Blue Devils (13-5, 4-3 ACC).

Clemson trailed by just four at the break (34-30) after battling back from a 10-2 run by Duke toward the end of the opening stanza.

It was the fifth halftime deficit overcome to win this season and the fourth in ACC play.

The Tigers erased an eight-point Blue Devil lead in the second half with an 8-0 run and ended up taking a 47-46 lead, but Duke responded with a 6-0 run to force a Tiger timeout.

Hall and Galloway combined for the next 11 Clemson points, including a Galloway 3-pointer to put Clemson ahead 56-54 with 6:24 left. Galloway followed that up with a 3-point play to give Clemson a six point advantage. The Tigers would lead by as many as 10 with 12 seconds left in the game and would finish the game off with an eight-point victory.

Clemson returns to the floor on Tuesday, Jan. 17 when it travels to Wake Forest. Tip time is set for 9 p.m. on RSN.

Notes: Clemson improved to 15-3 with the win over Duke … the Tigers moved to 7-0 in the ACC and extended its best program start to ACC play … Clemson has now won 11-straight regular season ACC games (program record) … with the win over the Blue Devils, the Tigers extended its home winning streak to 13 – eighth longest in program history … Clemson has now won two of the last three meetings against Duke in Littlejohn Coliseum … the win marked Clemson’s fifth this season overcoming a halftime deficit to win … Head Coach Brad Brownell won his 400th game … PJ Hall scored a season-high 26 points on 10-for-16 shooting from the floor … Brevin Galloway totaled a season-best 17 points on 7-for-14 shooting … Ian Schieffelin collected six points, eight rebounds, a career-high six assists and drew three charges.

Soak it in, Clemson family! 🧡🤍 pic.twitter.com/7l9lEL7nYQ

"This is a group you need to come out and support" pic.twitter.com/ZwlC9zKbdY

Have seen a bunch of games at Littlejohn Coliseum.

Thank you to our Students, Fans, Band and Staff for one we’ll all remember!#TigerPride 🐅 🏀 https://t.co/XNC8nspJN7 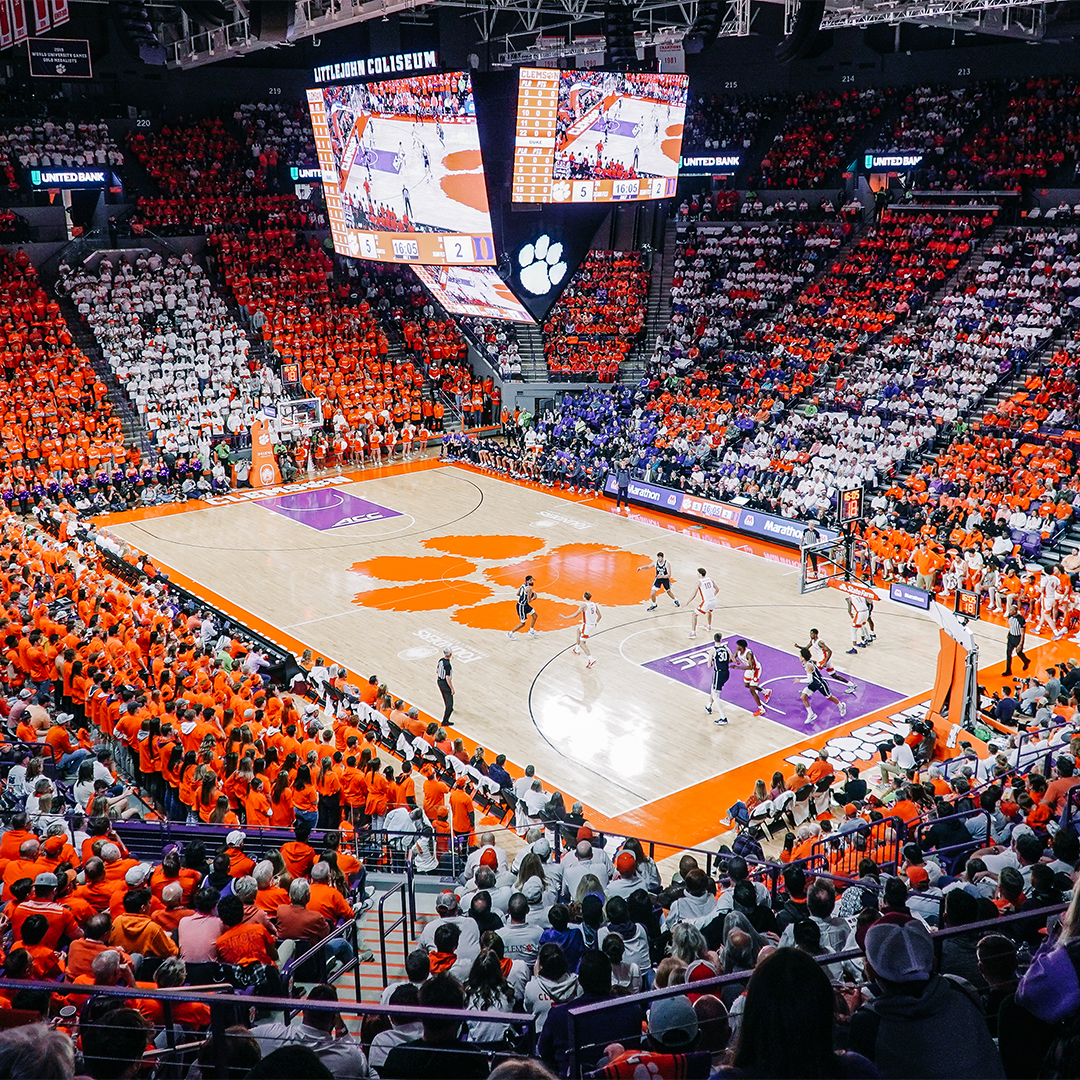 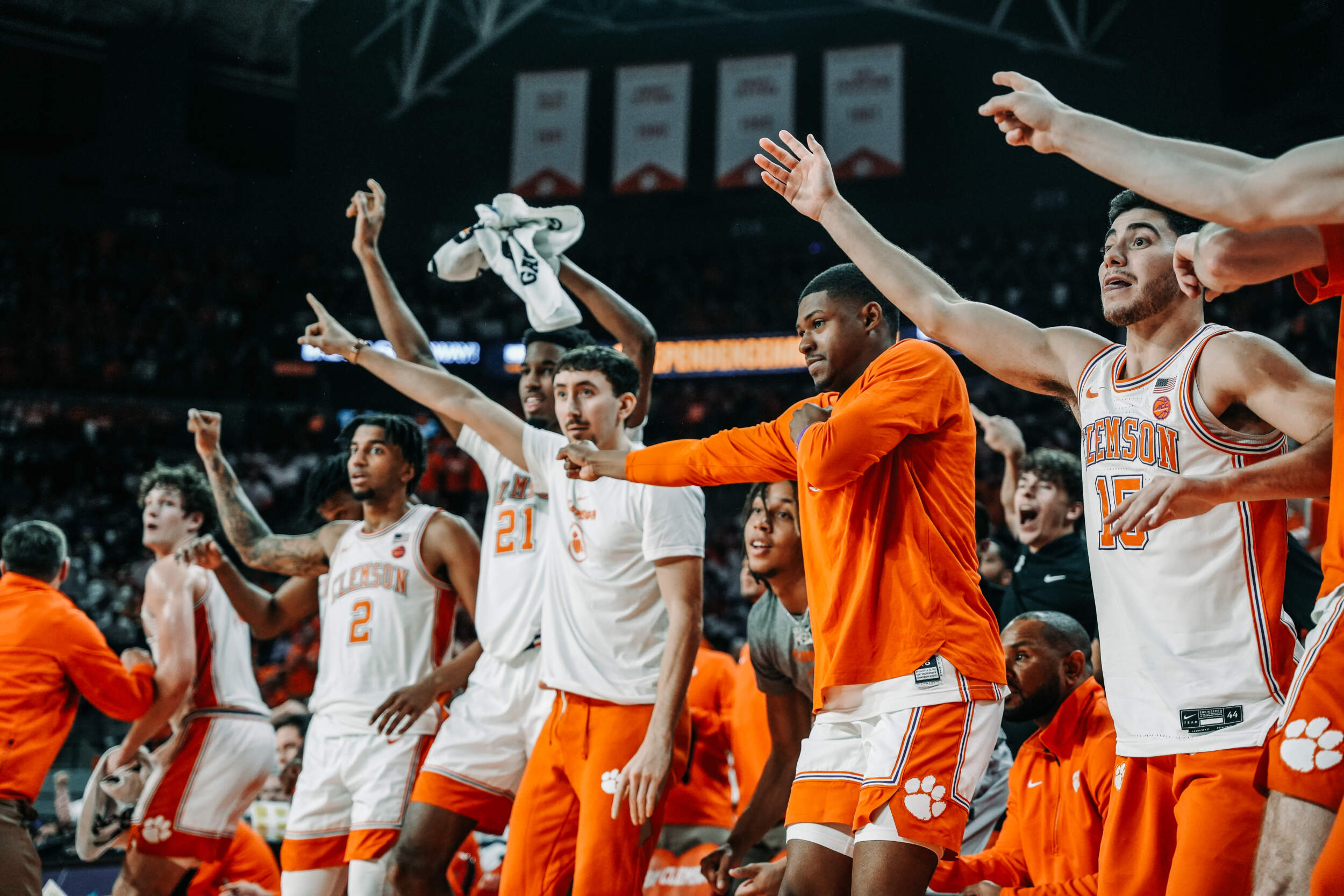 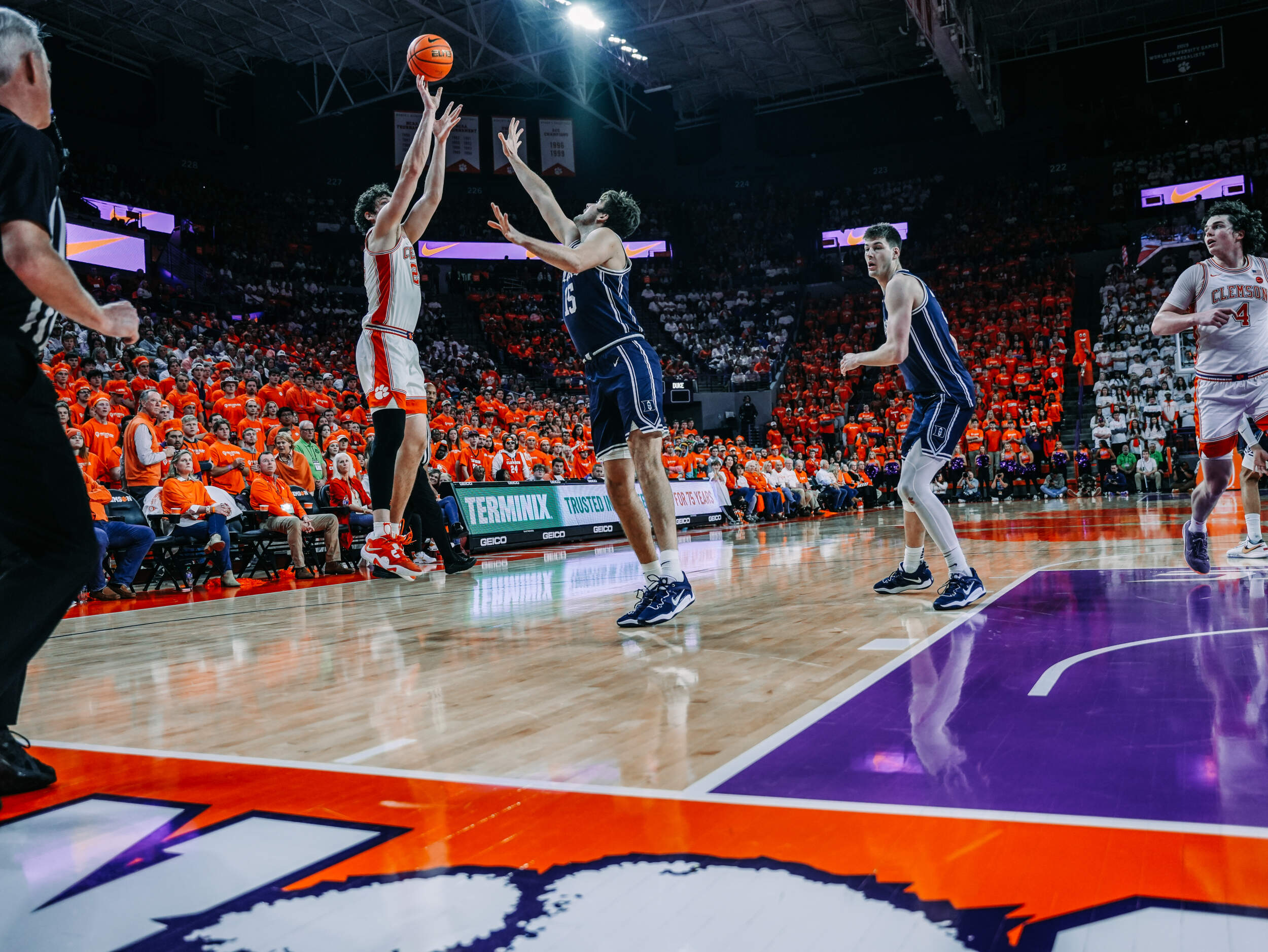 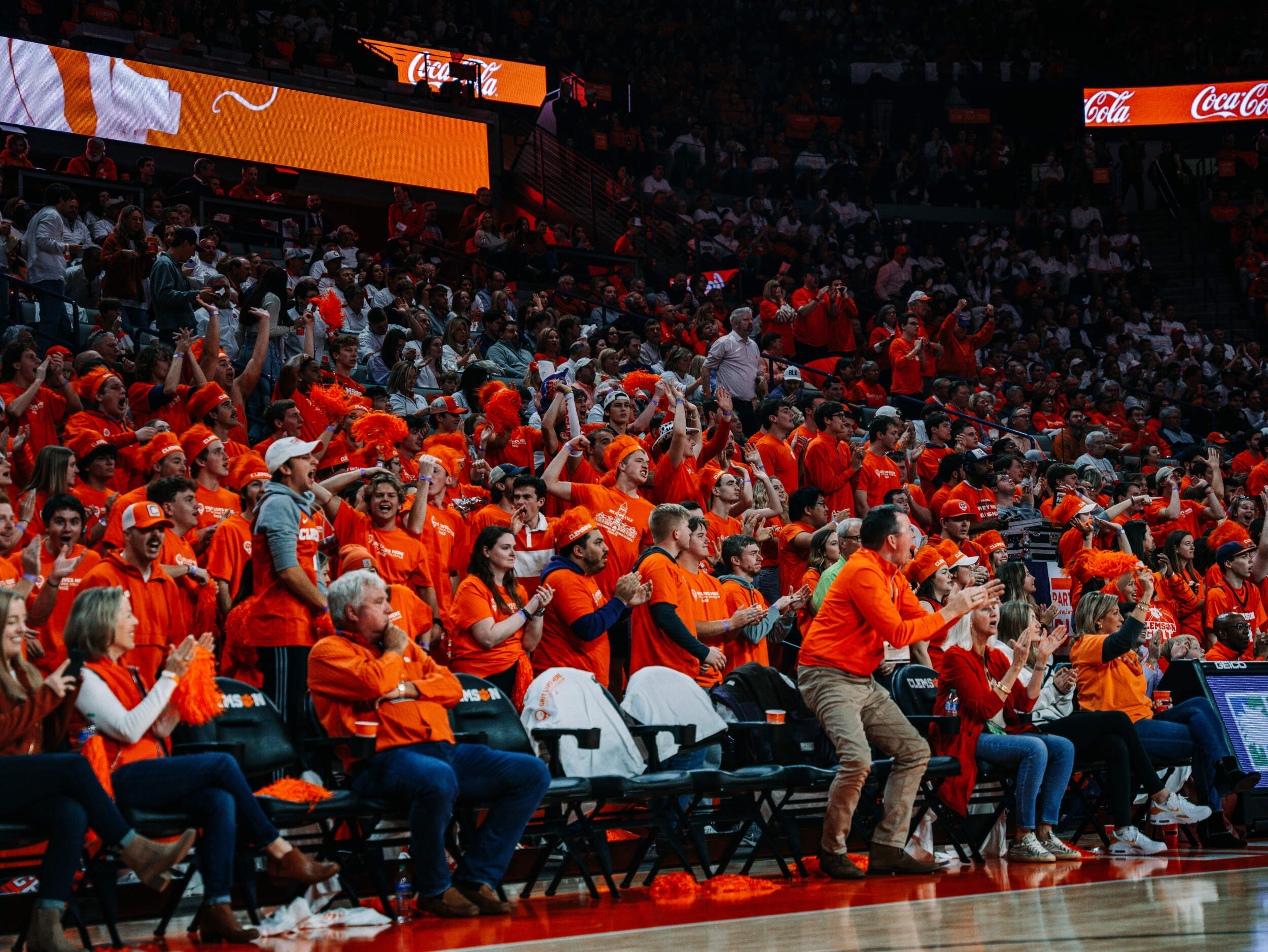 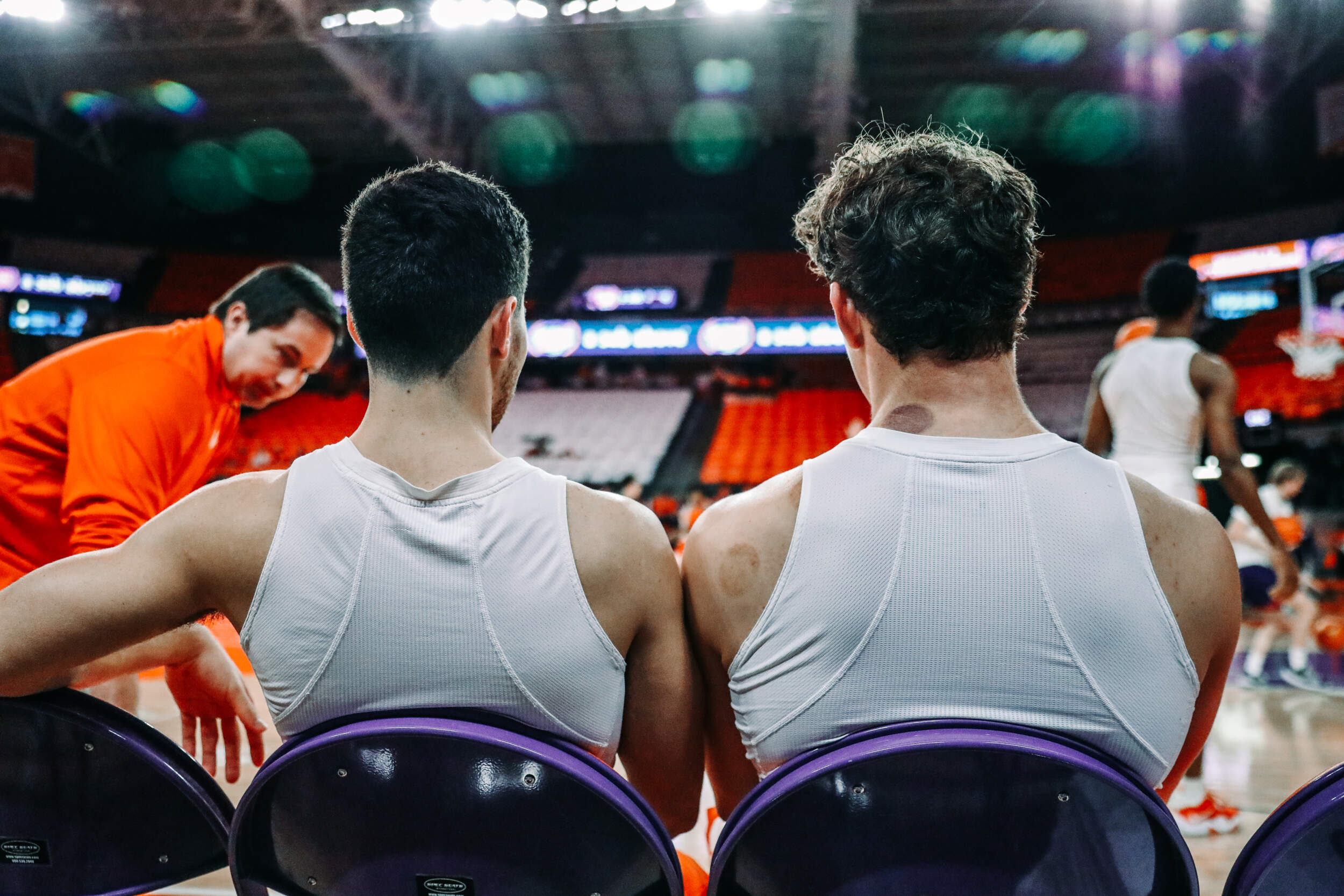 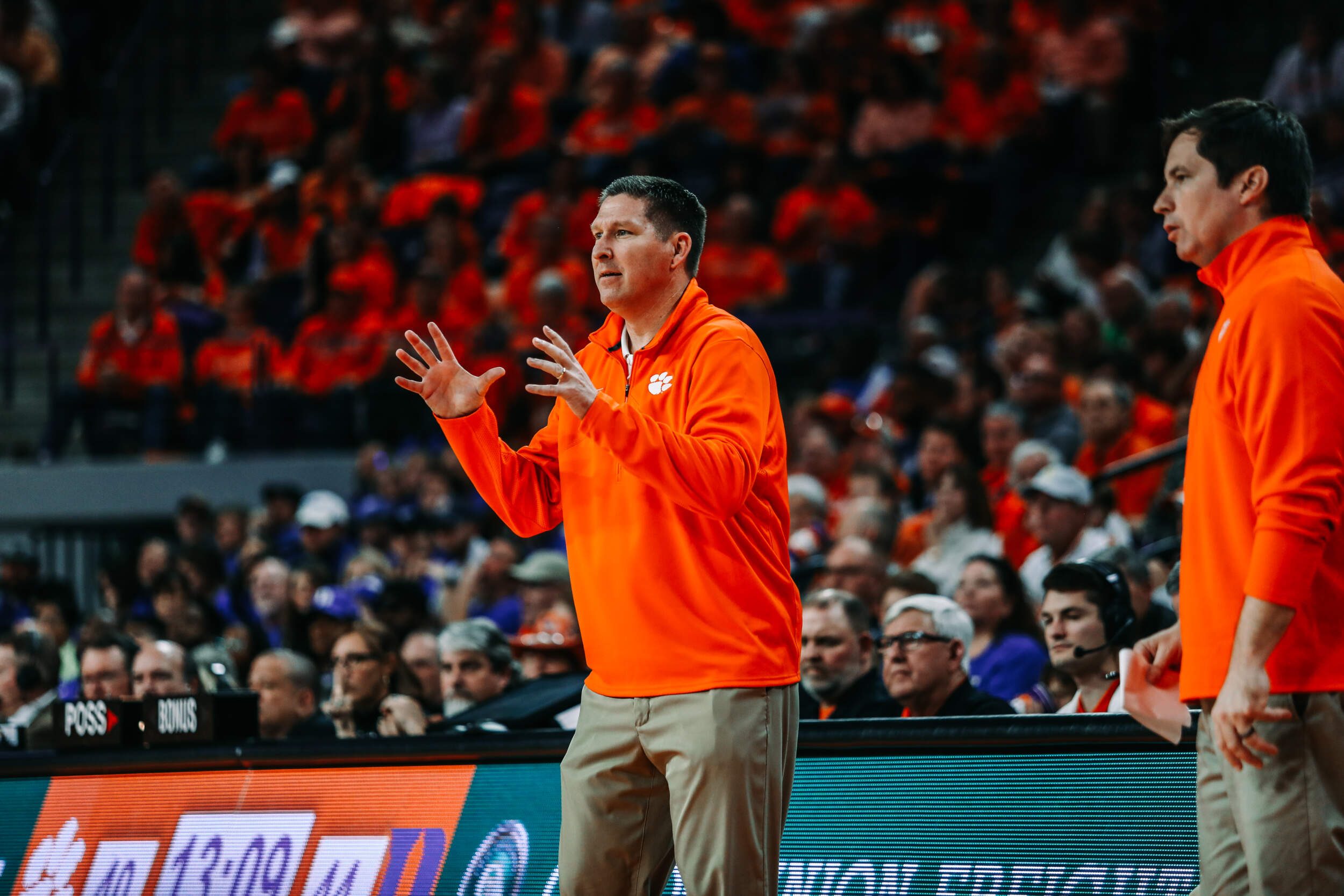 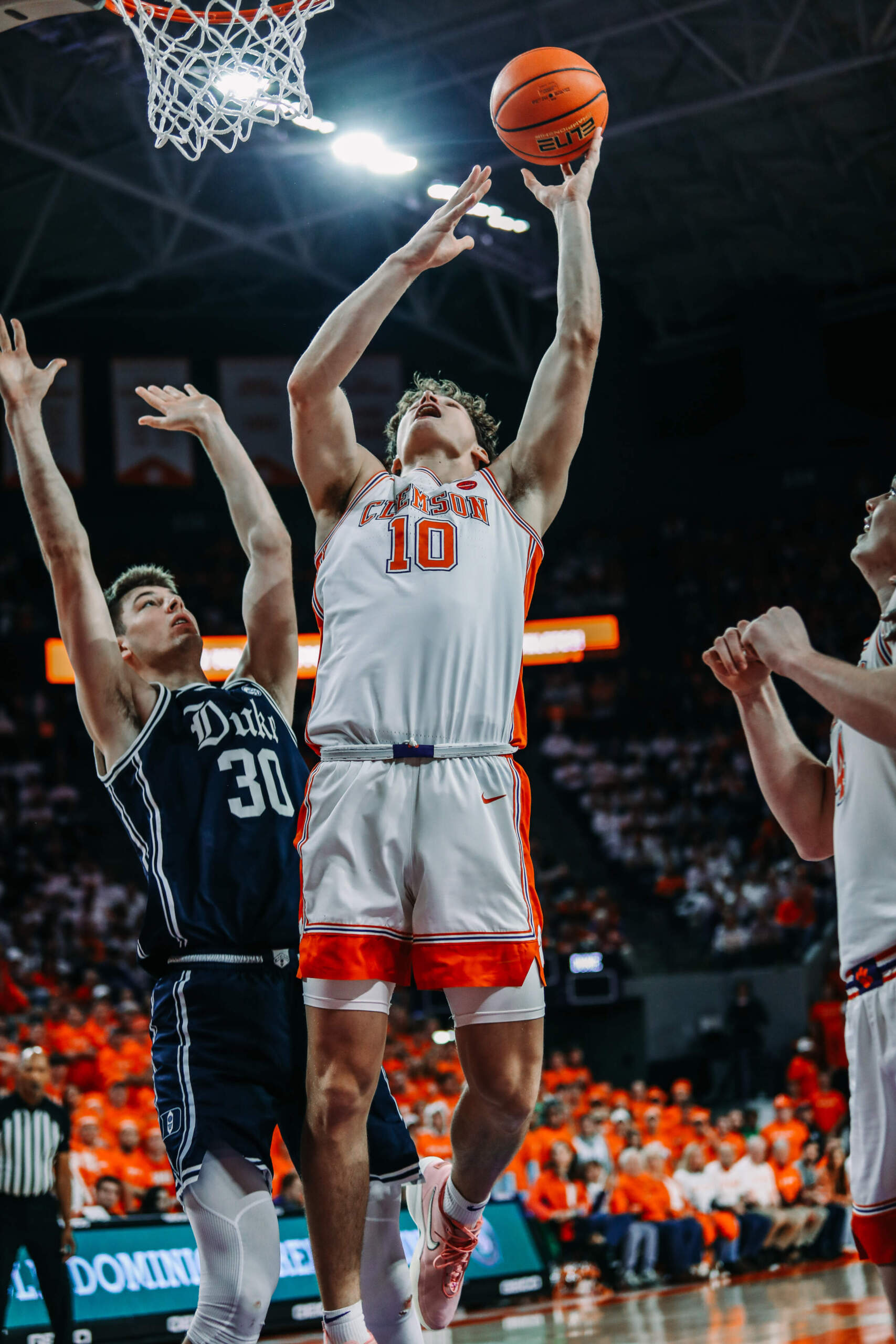 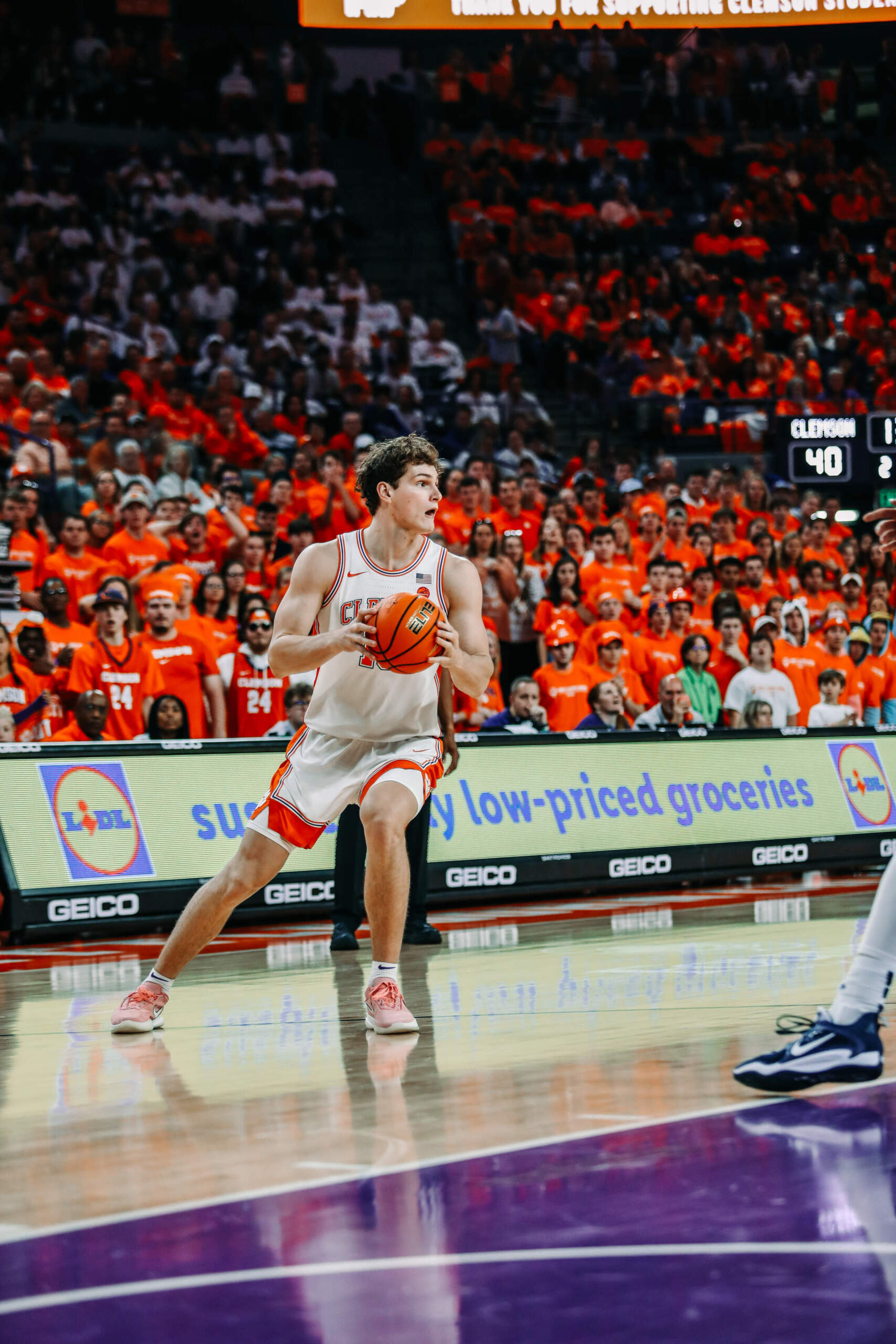 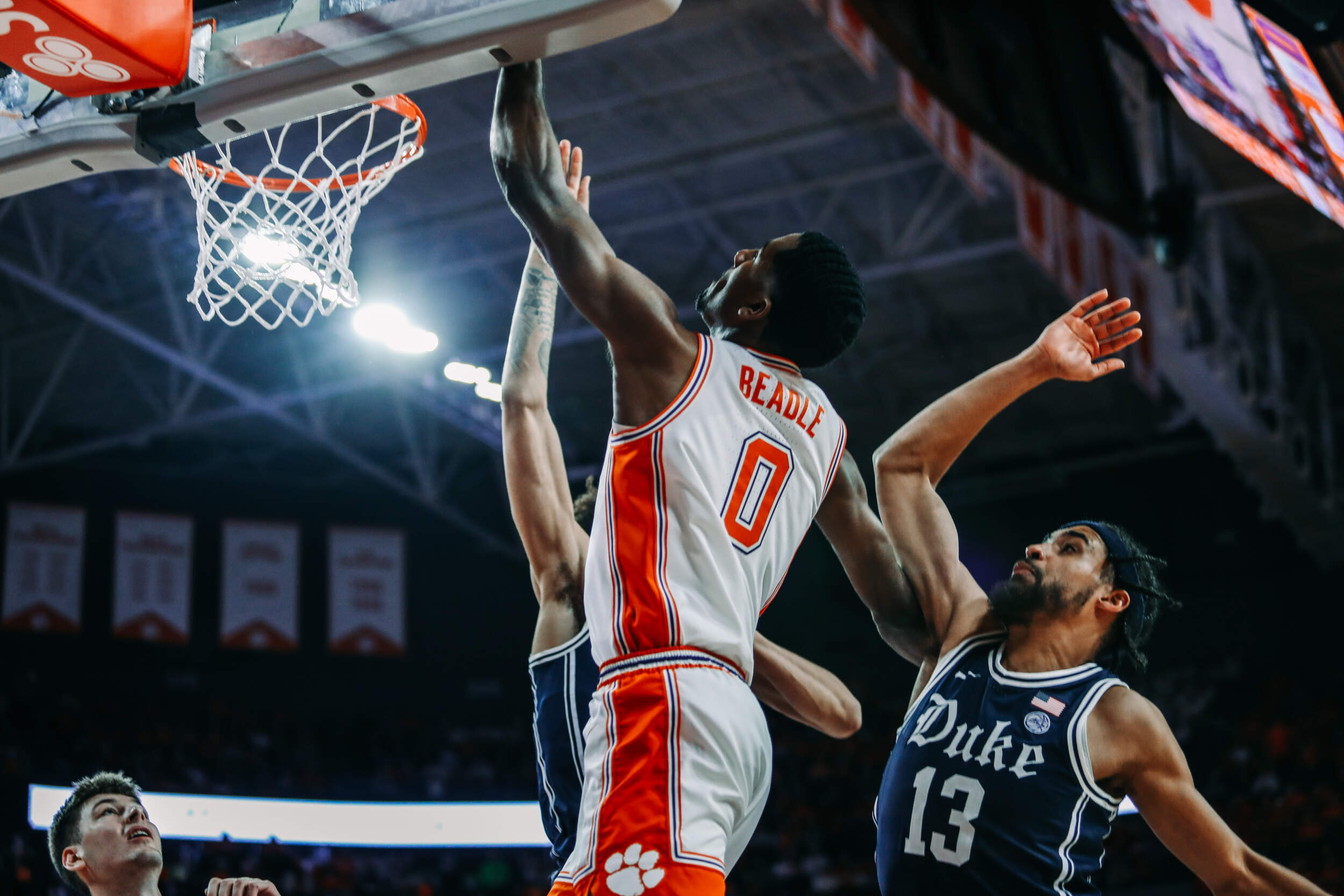