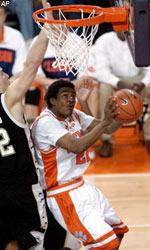 Wofford’s Greg Taylor hit a 3-pointer to cut the Clemson lead to 75-72 with 2:30 remaining. But Clemson’s Olu Babalola scored and then made a free throw to push the Tiger lead back to 78-72 with 1:52 left.

The Tigers also were led by Babalola with 17 points, Vernon Hamilton with 15 points, Chris Hobbs with 13, and Chey Christie with 10. Hobbs also had 12 rebounds, eight off the offensive glass.

Justin Stephens led Wofford with 20 points. Adrien Borders scored 17 and Howard Wilkerson chipped in 11 for the Terriers. Clemson shot 53 percent from the field while limiting Wofford to just 39 percent.

Both teams had rough games at the free throw line. The Tigers made just 17-of-39 from the line, while the Terriers made just 9 of 17. Wofford did not have one player with more than 10 rebounds but won the boards anyway, 47-44.