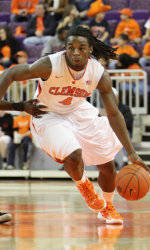 HONOLULU – Tanner Smith scored a career-high 26 points and freshman Rod Hall converted a three-point play with 3.8 seconds left in the second half to send Friday’s second-round game in the Diamond Head Classic into overtime, where the Tigers eventually claimed an 83-75 victory over Southern Illinois. The win improved Clemson to 7-5 on the season, and dropped the Salukis to 3-7 overall.

In the overtime period, the Tigers made only three shots, but converted 15-of-17 at the charity stripe for a 21-point outburst. It was Clemson’s second overtime win under Brad Brownell, and the second straight year the Tigers triumphed in extra time in a regular season tournament. In November of 2010, Clemson beat Seton Hall in the final round of the Paradise Jam in the Virgin Islands.

Smith scored 24 of his 26 points in the second half or overtime. The senior from Alpharetta, GA was 8-for-16 from the field, including 2-of-5 from three and 8-of-9 from the free throw line. His 26-point effort was an individual scoring high by a Tiger under second-year Head Coach Brad Brownell. Hall added a career-high 18 points on 5-of-10 shooting and 7-of-9 free throws. Devin Booker matched his career and season-best with 16, as he hit 7-of-9 from the floor and 2-of-3 at the line. A fourth hero in the game was recent graduate Bryan Narcisse, who scored seven points but delivered a career-best 12 rebounds in 31 minutes of action.

Despite a drought of 15 minutes without a field goal from the end of the first half into the second half, the Tigers finished the game 26-of-61 for a 42.6 percent clip. Clemson made 5-of-15 from three and a season-high 26 free throws in 34 tries. The Tigers also won the rebounding battle 41-35 over the smaller Salukis.

Clemson scored much earlier in Friday’s game than they did in the opening round against UTEP. The Tigers got a three-point play on a Booker tip-in and free throw just 37 seconds into the contest. The Tigers did not score versus UTEP until K.J. McDaniels hit a free throw nearly six minutes into the game.

Booker scored seven of the Tigers’ first 11 points before Andre Young converted his first three-point goal since the Winthrop game on Dec. 17. He had gone 0-for-11 over the last two games against Alabama State and UTEP. Young finished the game with 11 points. Clemson extended its lead to 20-12 on a Booker runout after Hall knocked down a floater in the lane moments earlier.

After a Chris Lowery timeout, SIU responded with nine straight points to claim the lead at 21-20. The Salukis built the lead to 26-22 with Booker and Smith on the bench with two fouls apiece. Josh Swan hit a three, the Salukis’ fifth in their first six attempts, to provide the four-point cushion.

The lead grew to eight after Justin Bocot hit a rainbow three, making the game 31-23 in favor of SIU. Clemson actually held Southern Illinois to only that basket in the final six-plus minutes of the opening half. Despite making only two of its final 16 field goal attempts, the Tigers were only down 31-24 at the break.

Hall came out strong in the second frame, scoring five consecutive points to cut the Saluki lead to four at 33-29. The second three-pointer of the season by Narcisse drew the Tigers back within five at 39-34 after Bocot hit yet another three earlier.

Smith pulled the Tigers within two at 45-43 on a rare four-point play after he hit a deep three on a Booker pass out to the wing. The next possession, Smith found himself alone inside so he spun to the basket and got a layup to go with a foul from the Salukis’ Dantiel Daniels. Suddenly, Clemson had its first lead since the 8:13 mark of the opening half.

With Clemson leading 50-47, SIU put together a 10-0 run to reclaim the lead again. The Salukis had three emphatic dunks, the last by Davante Drinkard. Smith broke another four-minute drought with a driving layup to pull the Tigers back within five at 57-52.

Narcisse had a great defensive play and snatched a rebound out of the air with Clemson trailing 61-55. He found Andre Young, who had a long pass ahead to Smith who flipped it back to his right to a trailing Booker for a monster jam to pull the Tigers within four. The next trip, Young had a steal and tie-up to give the Tigers possession, where Booker again took a feed from Smith for a dunk to make it 61-59. Smith had a couple of looks in the final minute to tie the game, but was unable to convert as the Salukis blocked his shot the final time with 15 seconds left.

SIU turned the two-point game into a three-point lead on a Drinkard free throw, but Hall answered with a three-point play as he bullied his way to the basket and drew contact. He converted the layup and freebie. Mamadou Seck missed a runner at the buzzer that would have given the Salukis the win, instead sending the game into overtime, a first for both teams this season.

The Tigers move on to the fifth place game to take on the winner of Xavier vs. Hawaii, who play Friday at 8:30 PM local time. If Xavier wins, Clemson’s final game will be against the Musketeers at 2:00 PM Eastern on Sunday. If Hawaii wins, Clemson and the Warriors will square off at 4:30 PM.