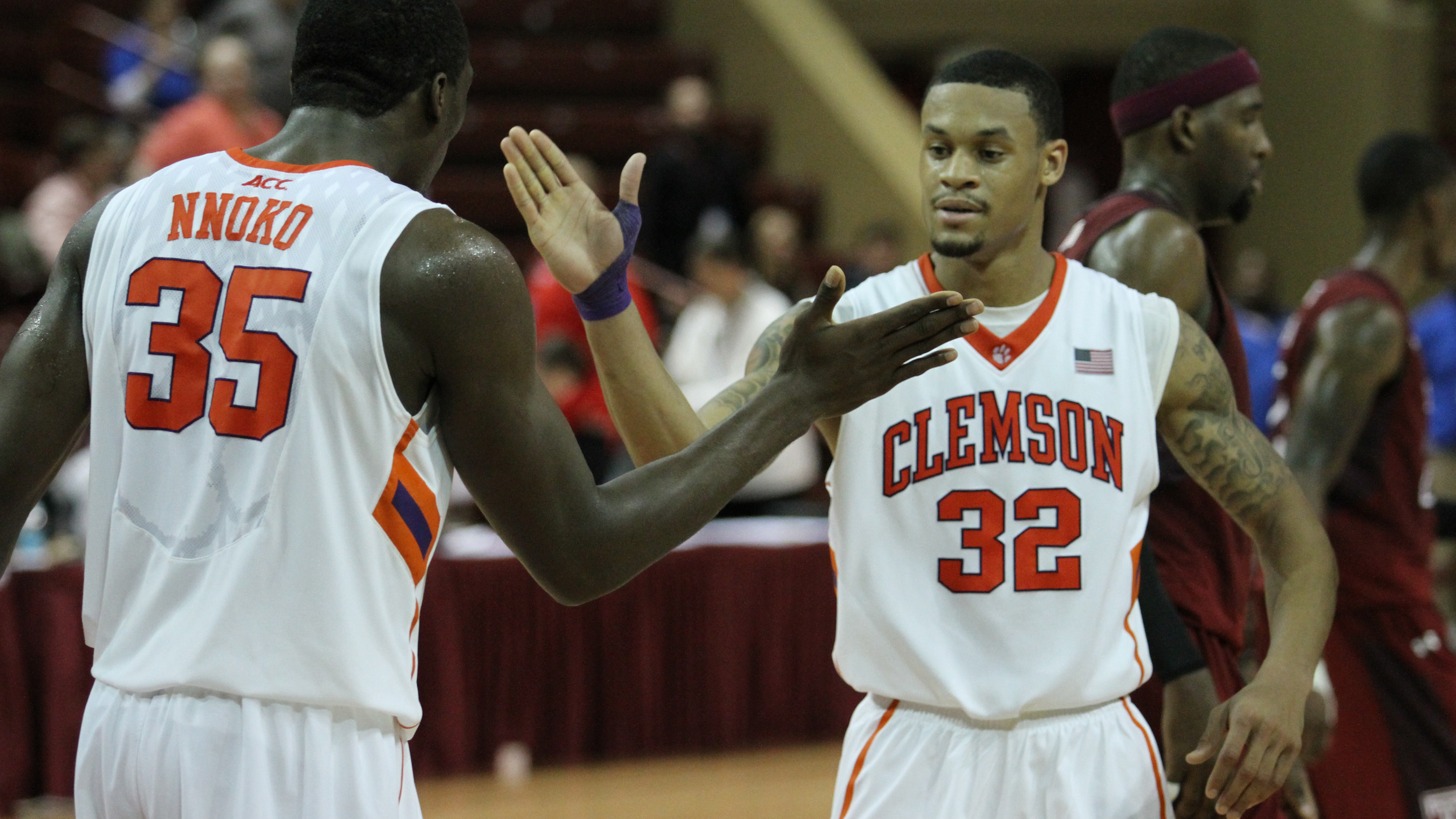 Clemson Rallies from 12 Down, Beats Temple 72-58 in Opening Round of Charleston Classic

CHARLESTON, SC – On a night when adversity reared its head on multiple occasions, the Clemson basketball team never relented Thursday night against Temple.

Watching junior leader K.J. McDaniels play through pain and an unexpected source provide a major boost, the Tigers persevered in the opening round of the sixth annual Charleston Classic with a 72-58 victory over the Owls at TD Arena.

Add in 14 points off the bench from Jordan Roper and 13 points from Rod Hall, and the Tigers (4-0) enjoyed a big night in arguably their most impressive win of the young season after trailing by 12 points late in the first half.

“Our guys bounced back from a deficit, and we showed some resiliency,” Clemson Head Coach Brad Brownell said. “We made a couple of small adjustments at halftime, and the guys played really well. They played with confidence in the second half.”

With the game knotted at 18-18, Temple (1-3) went on a 14-2 run, led by 12 points from Quenton DeCosey. And even when he wasn’t inflicting the damage directly, DeCosey was still finding a way to hurt the Tigers, as Josh Brown tipped in a missed DeCosey three-point attempt along the way during the run, during which Clemson went scoreless on eight of nine possessions.

Clemson, however, closed the half on an 11-2 run of its own, fueled by five points from McDaniels, while Hall hit a layup just before the buzzer to make it 34-31 Temple going into the break.

McDaniels, who took a hard fall on the baseline early on the night and had his right wrist partially wrapped, finished the first half just 2-of-9 shooting from the field, but finished with 12 second-half points.

He finished the night 7-of-18 from the field.

“We had to gather everybody,” McDaniels said of the Tigers’ first-half finish. “We were facing adversity, and we needed to go out with the right mentality and not give up on each other.

“(My wrist) was bothering me, but I ignored it throughout the game. I just needed to go out and prove I can play through the pain, and it worked out for the best.”

With the game tied at 51-51 with nine minutes to play, Clemson took the lead for good when McDaniels – who scored 20 or more points for the third time in four games – scored on a turnaround jumper, sparking an 18-5 run that eventually gave the Tigers a 69-56 advantage with less than a minute to play.

The Owls had managed to cut the deficit back to 56-55, with a driving layup – which led to an old-fashioned three-point play – from Hall made it 59-55 with 4:35 to play, and Temple never got closer the rest of the way.

“I thought (McDaniels) and Rod were terrific, and Nnoko was that third guy you really need in most games against really good teams,” Brownell said. “We had three guys playing at a high level.”

Coming into the night, Nnoko, who played a career-high 34 minutes – had only three points on the season – matching his number of field goal attempts.

Brownell said it was part of the Tigers’ game plan to get him going early, and it worked, as he scored on two of Clemson’s first three possessions to surpass his season point total less than three minutes into the night.

Coming into Thursday, he had only eight rebounds on the season.

“It was helpful,” Nnoko said of getting involved early, “but I was really trying to focus on defense. Coming into the game, the big thing was guarding (Temple forward Anthony Lee), who’s a real good player, and I was supposed to mark him. But it helped.”

After being out-rebounded in the first half 22-18, the Tigers – thanks in large part to Nnoko – bested the Owls on the boards 27-14 in the second half.

With the win, Clemson advances to face Davidson – which defeated Georgia by a final score of 94-82 on Thursday – today in the second round of the tournament, with tip off set for 9:30 p.m. ESPNU will televise the contest.