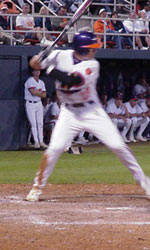 Clemson Rallies For 6-5 Victory Over Auburn

Clemson rallied for four runs in the eighth inning and fended off an Auburn comeback in the ninth inning for a 6-5 victory Sunday afternoon at Doug Kingsmore Stadium before 3, 779 fans. Jarrod Schmidt (1-0) picked up the win for third-ranked Clemson (3-0), while Ken Clayton (0-1) got the loss for 25th-ranked Auburn (7-4). The home opening sweep was the sixth for Clemson under Head Coach Jack Leggett.

Clemson led for most of the game but entered the bottom of the eighth trailing 4-2. David Slevin led off with a single, Steve Pyzik walked and L.J. DeMaino was hit by a pitch to load the bases with none out. After a Kyle Frank strikeout, Khalil Greene drew a walk to plate one run. All-American Jeff Baker then stepped to the plate and drilled a line drive to right field that cleared the bases and gave Clemson a 6-4 lead heading into the ninth.

After loading the bases with no outs in the top of the ninth, Auburn scored a run when Bobby Huddleston hit an infield single. John Tyler grounded back to Clemson closer Paul Harrelson, who threw to home plate for a force out. Harrelson then induced a 4-6-3 double play to end the game and earn his second save of the year.

Auburn got on the board first in the top of the third inning. After singles by Josh Todd and Shawn Gamble, Chuck Jeroloman laid down a two-strike bunt to move the runners to second and third. Todd scored on a groundout by Javon Moran, but Jackson struck out Tug Hulett to get out of the inning.

Clemson responded in the bottom of the frame with two runs of its own. Catcher Collin Mahoney, making his first start as a Tiger, hit his first career home run to even the score. L.J. DeMaino immediately followed with a triple down the right field line and scored on Kyle Frank single to right. Auburn tied the score at two in the seventh inning when Gamble homered to right off of reliever Patrick Hogan and then took the lead in the eighth after a two-run double by Todd.

Steven Jackson started on the mound for Clemson and worked six solid innings, allowing only one run on four hits, in a no-decision. Auburn starter Eric Brandon yielded two runs off four hits.

Clemson will play at the College of Charleston at 6:00 PM this Friday before traveling to Columbia for a game with South Carolina Saturday at 4:00 PM.