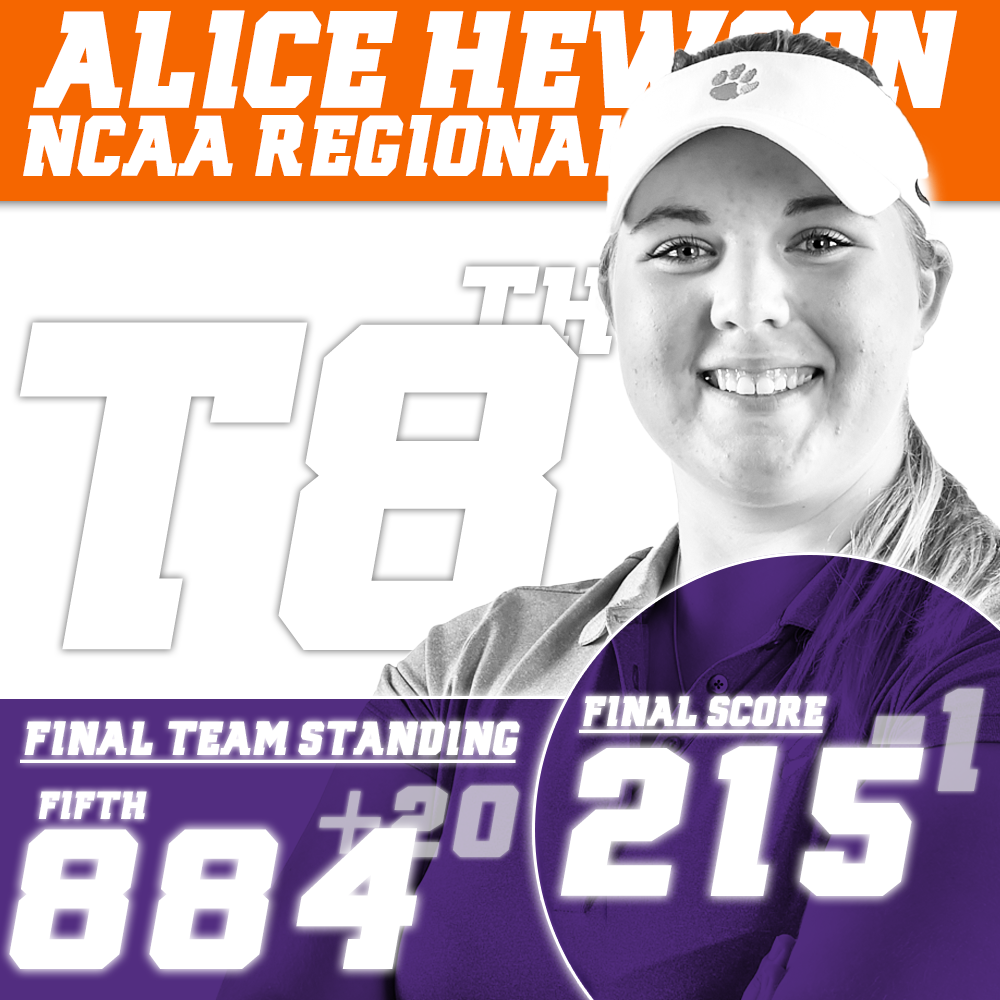 Athens, Ga.—Marisa Messana fired a team best 73 on Wednesday, and Alice Hewson finished in the top 10 for the sixth time this year to lead Clemson to a fifth place finish out of 18 teams at the Athens Regional of the NCAA Women’s Golf Tournament.   By virtue of its fifth-place finish, Clemson will move on to the National Championship Tournament at Rich Harvest Farms Golf Club in Sugar Grove, Illinois May 19-24.

Clemson entered the tournament as the No. 10 seed in the regional and was ranked 39th nationally. But the Tigers beat six top 25 teams in Athens to advance to the 24-team National Tournament for the first time in the program’s four-year history.

Third ranked Alabama won the tournament by 14 shots with an 857 score, while Northwestern was second at 871. Michigan State, who was not ranked in the top 50 in the nation entering the tournament, finished third with an 872 score. Baylor was fourth at 877 and Clemson was fifth at 884. North Carolina, who shot one under par on Wednesday grabbed the last spot at 886. Host school Georgia, ranked eighth in the nation entering the tournament, finished seventh and missed the cut by three shots.

“This team followed the game plan the entire tournament,” said Hester, a Georgia graduate who had played the course many times. “We didn’t make putts like we did yesterday (when the team shot 282), but we were steady.   We were a little nervous trying to close down the stretch, but we made it and it feels great.”

It was a remarkable day for Messana, who had the best score of the day for the first time all year. She had been Clemson’s non-counter the first two rounds, but as the first Tiger off the tee on Wednesday she set the tone. “Marisa was one over after nine holes and she seemed frustrated. She thought she should be scoring better. But I told her some days good is good enough. Just be patient.”

Messana had two birdies on the back nine and shot even par to finish with the 73.   The outstanding student-athlete played the par four holes at 4.0 for the round, the same as her career grade point average.

Hewson was Clemson’s top player for the tournament with a 215 score after a 74 on Wednesday, good enough for eighth place individually.   The sophomore had three birdies on the day to break the school record for birdies in a season. She now has 110 entering the NCAA National Tournament.   Hewson made a triple bogey six on the par three 16th hole when her tee shot hit a bank and bounded back into the water, but she settled down to make easy pars the last two holes and give Clemson five shots to spare over the six-team cutline.

Ana Paula Valdes was Clemson’s second best player for the 54 holes with a 223 total, good enough for 30th place.   Valdes had a 75 on Wednesday after a team best 69 on Tuesday.  The highlight of her round was a birdie two on the 14th hole when she hit her tee shot to a foot of the hole. Sydney Legacy, who played with an injured wrist for much of the tournament, made consecutive birdies on the 10th and 11th holes and had a 76 on Wednesday to finish at 225, good enough for 37th place.

Freshman Kennedy Swann, who entered Clemson in January, had a 78 on Wednesday to finish at 226, good enough for 43rd place.

The Clemson team celebrated its accomplishment after the round was over, dousing Hester with bottles of water.   Hewson, Clemson’s highest ranked player and two-time first-team All-ACC selection, shared her joy.  “I thank God that I have been able to come to Clemson and help the program make history,” said Hewson, whose score has counted towards the team score in all 63 rounds of her career.

“We wanted to qualify for Coach Hester, but I think it was more important that she set up a good plan for us because she had such a strong knowledge of the course. She had a great game plan all week.”