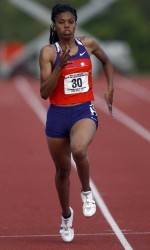 Clemson Puts a Wrap on Day One at Penn Relays

PHILADELPHIA – Clemson competed in a handful of events on Thursday, the opening day of action at the 116th annual Penn Relays at Historic Franklin Field. The Tiger women competed in two relays, while several individuals had high marks on Thursday at the highly-regarded meet.

Both the women’s 4x100m and 4x400m relays finished 13th overall on Thursday. The 4×1, fresh off an ACC championship for the first time since the 2001 season, produced a time of 45.54. The 4×4 had a time of 3:39.50 – better than its time at last weekend’s ACC Outdoor Championships – to place 13th out of 89 competing teams. Clemson utilized the same 4x100m relay lineup, but went with a different 4×4 group. The mile relay was comprised of Sonni Austin, Brittany Pringley, Michaylin Golladay and Stormy Kendrick. Austin had a good performance individually Thursday. The freshman from the Atlanta area finished the 400 hurdles with the sixth-best time at 59.62. In total, 53 competitors ran the event.

Clemson had a few competitors in the field events on Thursday. Amy Morrison was sixth in the open pole vault after clearing 12’6″. She was All-ACC for the first time in her career after a personal best 12’9.5″ jump last Saturday. In the javelin, ACC runner-up Bethanie Wachna placed eighth Thursday afternoon with a throw of 146’11”. Wachna is the school record-holder in the event.

Clemson returns to action for day two of the Penn Relays on Friday. Jordan Rispress, a freshman from Ohio, competes in the men’s intermediate hurdles to kick off the action.