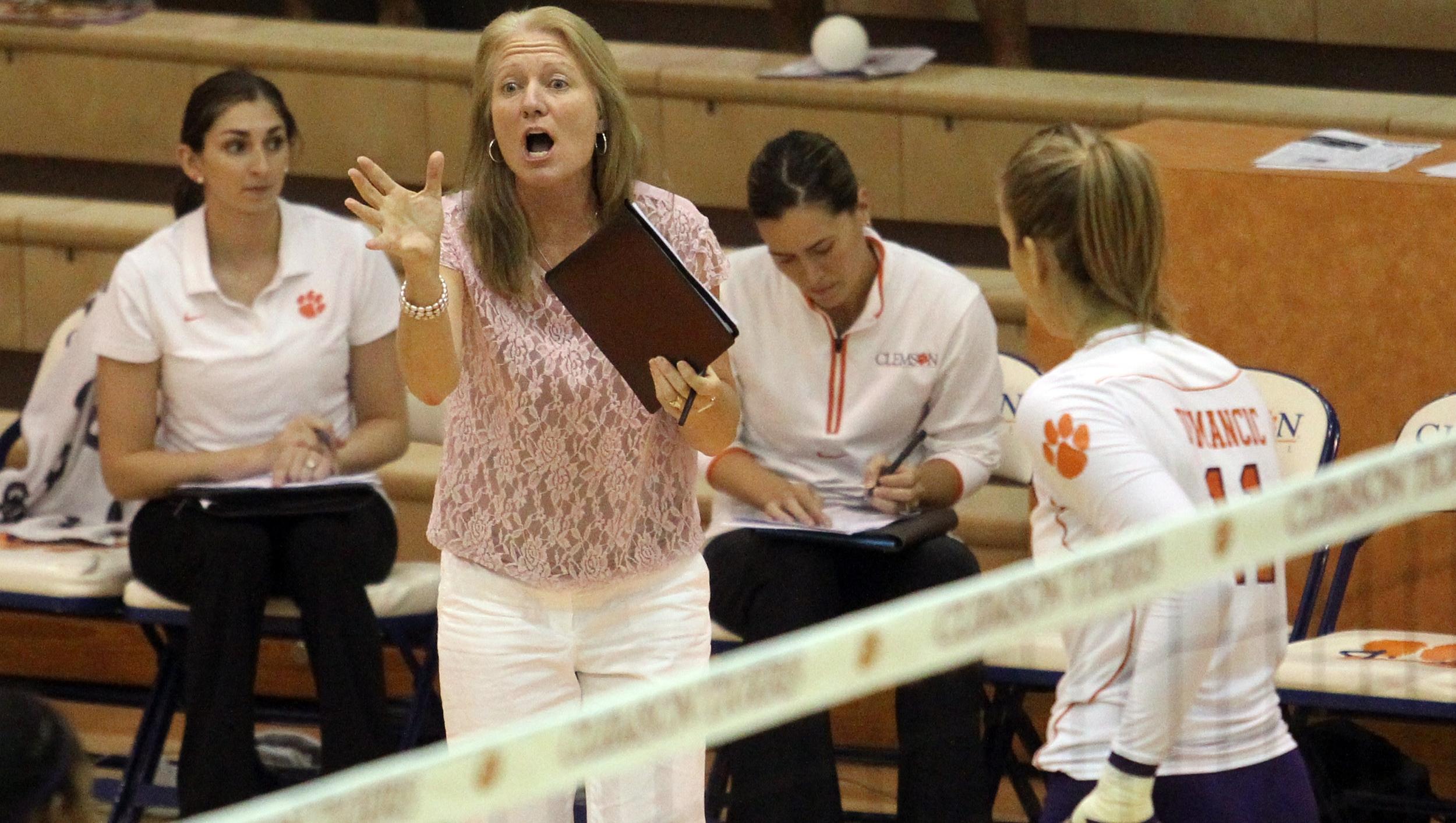 CLEMSON, SC – The Clemson volleyball team won the first two sets against No. 18 Florida State, but the Seminoles (10-5, 3-1 ACC) fought back to take down the Tigers in five (19-25, 17-19, 25-23, 25-21, 15-8) on Saturday night in Jervey Gym. Clemson (7-8, 1-3 ACC) will have a short week to prepare for Georgia Tech, who comes into town on Wednesday.  Clemson got the bulk of their production from outside hitters Kristin Faust and Mo Simmons, who had 21.5 points apiece on the evening. It was a career night for Faust, who is in her third match out outside this season after playing most of the first 12 matches at libero. Faust, a Florida native, had a career-high 18 kills in 60 attacks, and added a career-best six total blocks.  Simmons had 20 kills, 15 digs and three blocks on the night in leading the Tigers offensively for the 13th time in 15 matches this season. Simmons entered the match leading the ACC at 4.52 kills per set.  Most of the statistical edges Clemson claimed in the first two sets were quickly reclaimed by the Seminoles in the final three sets. Namely, Florida State was able to agitate Clemson’s hitters to the tune of 13 blocks over the final three sets after mustering just three over the first two sets. Clemson was hitting above .300 at the intermission, but hit no higher than .125 in any of the last three frames.  Florida State outside hitter Nicole Walch had 22 kills to lead all players and 19 digs, with eight of those coming in the fourth set and five coming in the fifth.  Clemson libero Niki Collier finished with 15 digs, career-highs in assists (7) and aces (3), and was 51-for-51 in serve receive opportunities. Senior setter Hannah Brenner had 46 assists and 14 digs, the 38th double-double of her career.  Defensively, the Tigers had 15.5 blocks, led by Beta Dumancic’s eight and Faust’s six, while Irem Bayramoglu had 12 digs in the back row. Leah Perri added nine kills and eight digs, but was held to just ten attempts over the final three sets after nailing three kills in each of the first two sets on 13 attempts.  It was Florida State’s ninth straight win against the Tigers, who were looking for their first upset of a top 25 opponent in Jervey since 2011, when 22nd-ranked Miami went down in five sets.  Clemson took a 2-0 lead behind efficient offense, as Brenner guided the Tigers to 32 kills and .306 hitting over the first two frames. Faust and Simmons each had 10 kills at intermission, while Simmons had a team-high 11 digs. The Tigers also had seven blocks and were able to sideout on 64 percent of FSU’s serves.  After intermission was a different story, as FSU began to pick up the pace defensively, totaling five blocks. Leah Mikesky had 14 kills after the break, and Walch had 16 in the final three sets alone.  In the fifth set, the Seminoles had five blocks, as Clemson hit -.150 and did not put together two consecutive points.  The teams will meet again later this season in Tallahassee.