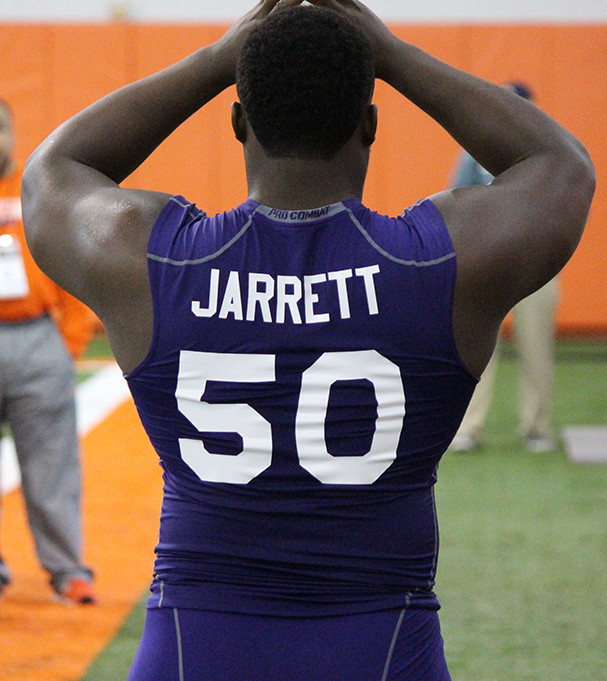 Seventy-two scouts. Just chalk it up as another Clemson record established by the 2014 senior class.

Sixty-nine representatives from the NFL — including at least one from all 32 teams — and three from the Canadian Football League were in attendance Thursday at Clemson’s Pro Day. The event saw over 20 former Tiger football players work out in hopes of taking their games to the next level.

The executives and scouts watched as the Tigers began with the 40-yard dash. Unofficially, cornerback Martin Jenkins recorded the day’s top time with a 4.40. The three-cone drill followed.

Then, it was off to the bench press. Grady Jarrett put up 33 reps of 225 pounds. Immediately following him, fellow defensive tackle Josh Watson was not to be outdone. He hoisted the weight 37 times, the top mark of the day.

The day ended with position drills for each group. That’s where projected first-rounder Vic Beasley wowed with his athleticism and sheer strength. Clemson’s defensive line — five-deep with prospects — commanded much of the attention.

The media blitz was heavier than ever. Mike Mayock of the NFL Network was in town, as was CBS Sports. Over 30 members of the local media turned out just to get glimpses of the players going through drills.

It was a highly anticipated Pro Day in Tigertown … and it certainly didn’t disappoint.

“That was pretty cool. (Coach Belichick) and I had a chance to swap some stories. We have a few commonalities. I’ve always admired what he’s been able to accomplish. Guys in New England get what they earn; and that’s what we try to do here — regardless of how high you’re drafted by them, or how highly recruited you are here. I appreciate him, and the other coaches being here today.” – Dabo Swinney

“I didn’t feel like I had much to lose by doing the drills again. I had a lot of fun. It was good to see so many big names come to Clemson; we have a lot of good players here. For them to come out and see us, we tried to put on a good show.” – Grady Jarrett

“I think I showed what I can do. I watched the (NFL) Combine, and it ticked me off. I felt I should have been there. It’s just motivation. I want to hit the ground running from this performance today.” – DeShawn Williams

“I came back (my senior year) to get my Clemson degree. Football will always be there, but education can be hard to go back and get.” – Vic Beasley

“I was prepared for the day, and I think we did a good job as a group. (Scouts) definitely see me as a three-down guy in any scheme. I think Clemson’s prepared me well for that. Some teams have shown a lot of attention so far, and I’m thankful for that.” – Stephone Anthony