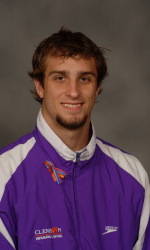 The Clemson Men’s Swimming and Diving team finished the preliminary session at the Georgia Tech Aquatic Center with several career-bests, including the 100 free to place three swimmers in the evening’s final session.

The Tigers then had a strong showing in the 100 free, putting three swimmers into the evening’s finals. Mark Vahle (44.55), Adam Farnham (44.70) qualified sixth and seventh. Vahle’s time was fourth-best in Clemson history and Farnham’s was fifth. Senior Stephen Russell tied for eighth and was forced into a swim off after a 44.74.

Russell downed Maryland’s Nick Cordes with a 44.11, second-best in Clemson history. The Tigers will see three finishers in the top-eight for the finals. Also, this group will likely team up for the 400 free relay, the last event of the championships.

Attila Ruszka placed 13th in the 200 breast with a 2:02.99 and will compete in the consolation finals for important points.

In the 200 fly, freshman David Gordon put in the fourth best time in Clemson history, a 1:48.95, while junior Dan Mengering moved up to sixth on the all-time list with a career-best 1:49.33. Both will compete for points in the consolation finals.

The Tigers will wrap up competition at the ACC Championships tonight, starting at 7 p.m.