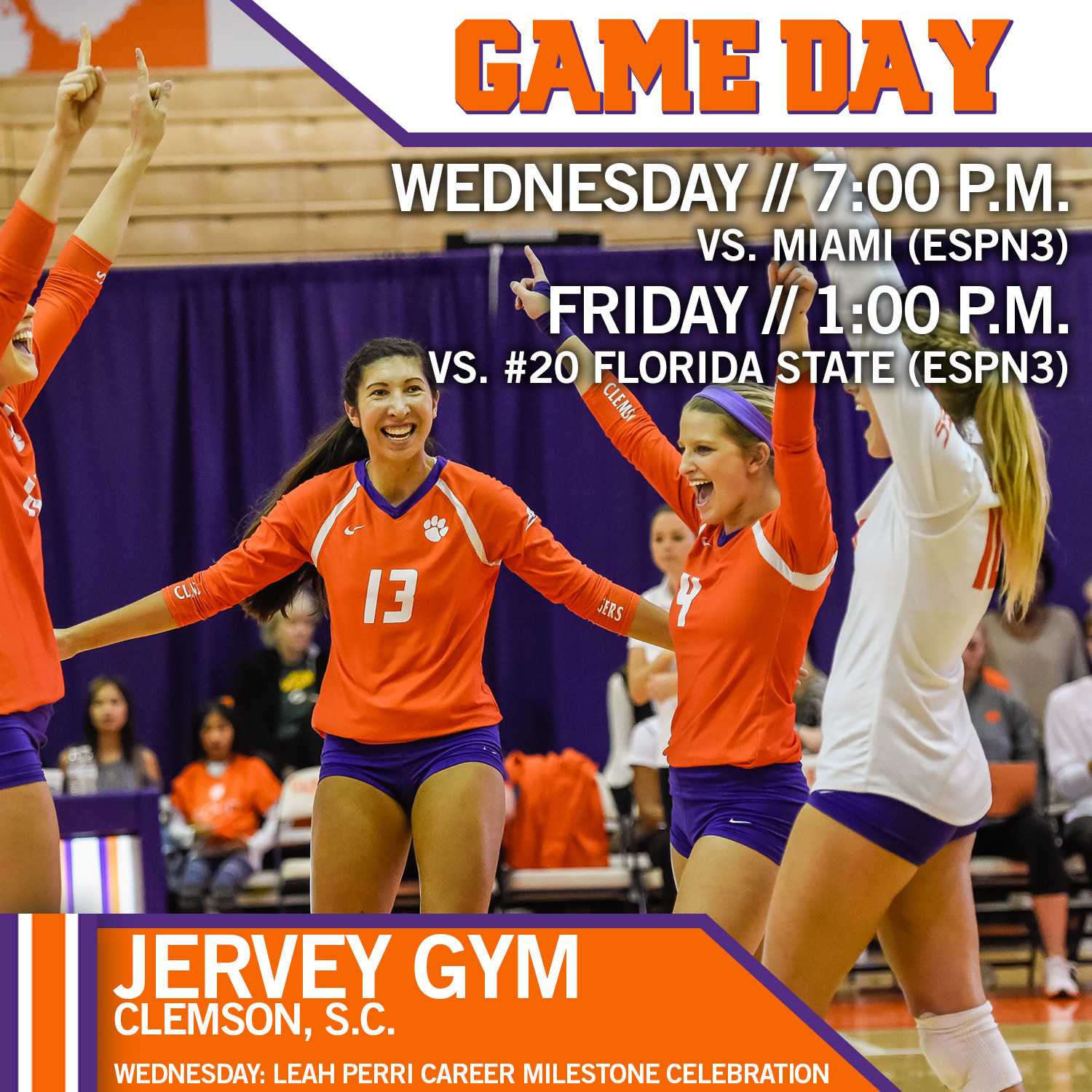 CLEMSON, S.C. – Clemson will host two NCAA Tournament bound teams in its final home stand of the 2015 season. On Wednesday, the Tigers will take on Miami at 7:00 p.m., in Jervey Gym and will then host #20 Florida State on Friday at 1:00 p.m. Wednesday night’s match will feature a special presentation honoring Leah Perri for earning 1,000 kills in her career.

The last time Clemson competed on a Wednesday it defeated Georgia Tech in four sets. Clemson will look to capitalize on a handful of Tigers currently riding hot-streaks into its final two contests of the year.

The streak has fueled her run in NCAA history as the active career digs leader is now seventh all-time with 2,678 career digs. She needs just four digs to advance to sixth all-time, 16 to break into the NCAA’s top five and is 22 digs from becoming one of only five student-athletes to ever record 2,700 career digs in Division-I history.

Since joining Clemson from Northwestern State, she has been the ACC’s top libero all season long, owning a 5.24 digs per set average and 545 digs. Arneson’s dig per set average also ranks 19th in the country and declares her as one-of-two power five conference student-athletes to be ranked in the NCAA’s top 20 of that category.

Leah Perri has finished the best season of her career strong as she has thrown down 123 kills over the course of her last eight matches for a 4.24 kills per set average. In that stretch she earned her 1,000th career kill in a 20-kill, 19-dig performance in a victory at Georgia Tech on November 11.

Over the course of her last eight matches, Perri has three matches with 20 or more kills and four matches with 10 digs or more. The stretch of success has contributed to a career-best season with 390 kills and 198 digs.

Sophomore setter, Kate Federico has also enjoyed a great deal of success lately with her 9.52 assists per set average in her last six contests with 200 assists over the course of 21 sets. Federico has also finished three of those matches with double-doubles.

Arneson’s understudy, Kennedy Wilson-Talmadge recorded her fourth match this season with 10 digs or more as a defensive specialist against Notre Dame on Sunday. Three of her four matches with 10-plus digs this season have come in her last six contests. Sydney Moseley has enjoyed success in the back row as well lately as she has generated 54 digs complemented by 34 kills in her last six matches. Three of those contests she finished with 10 digs or more.

Notes (in 140 characters or less)  • Clemson’s eight freshmen is the highest total in the Atlantic Coast Conference.• Hugh Hernesman is the ninth head coach in Clemson volleyball history.• Keelie Arneson’s 15 digs against #17 Florida State broke her into the NCAA’s list of top 25 all-time career dig leaders.• Keelie Arneson’s 31 digs in the win against Georgia Tech (11/11) broke her into the NCAA’s list of top 10 all-time career dig leaders.• Keelie Arneson is the NCAA’s active career digs leader with 2,678 digs. The total ranks her 7th all-time in NCAA history.• Keelie Arneson is 4 digs from the 6th most in NCAA history, 16 from 5th and 22 from being 1-of-5 student-athletes to own 2,700 career digs.• Keelie Arneson has averaged 6.19 digs per set in her last seven matches (161 digs, 26 sets) with 20 or more digs in five of them.• Keelie Arneson is the 36th Clemson student-athlete to be recognized as one of the NCAA’s career leaders in a statistical category.• Keelie Arneson ranks 23rd in NCAA history with a career 5.31 digs per set average.• Keelie Arneson currently leads the ACC with a 5.24 digs per set average and 545 digs.• Keelie Arneson’s 5.24 digs per set average ranks her 19th in the nation and is the second best average in a power five conference.• Leah Perri recorded her 1,000th career kill with her 20-kill, 19-dig effort in the win against Georgia Tech (11/11).• Leah Perri has registered 4.24 kills per set (123 kills, 29 sets) in her last eight matches.• In Leah Perri’s current stretch of eight matches she has three with 20-plus kills and four with 10-plus digs.• Leah Perri headlines the Clemson attack with a career-best 390 kills in 2015 which is the sixth most in the ACC.• Leah Perri ranks seventh in the conference with a 3.68 kills per set average.• Leah Perri is fifth in the ACC with 438.0 points and is seventh with a 4.13 points per set average.• Leah Perri has double-digit kills in 22-of-30 matches this season.• Kate Federico ranks seventh in the conference averaging 8.68 assists per set and is 10th with 807 assists.• Kate Federico has 11 double-doubles this season and 14 matches with 30 assists or more.• Kate Federico has averaged 9.52 assists per set in her last six matches (200 assists, 21 sets) and has double-doubles in three of them.• Kate Federico’s 1,171 assists last year are the second most ever recorded by a Clemson freshman.• Kate Federico’s 1,171 assists in 2014 was the second highest total in the ACC and the most recorded by a freshman.• Kailey Harvell is second on the team with 263 kills and a 2.58 kills per set average.• Kennedy Wilson-Talmadge’s 11 digs at Notre Dame last Sunday give her four 10-plus dig matches as a defensive specialist in 2015.• Three of Kennedy Wilson-Talmadge’s four matches with 10 digs or more have come in her last six matches.• Kennedy Wilson-Talmadge has 163 digs in 90 sets, which is the most of Clemson’s reserves.• Sydney Moseley has enjoyed her best six-match stretch of 2015 with 35 kills and 54 digs. She’s recorded 10 or more digs in three of them.