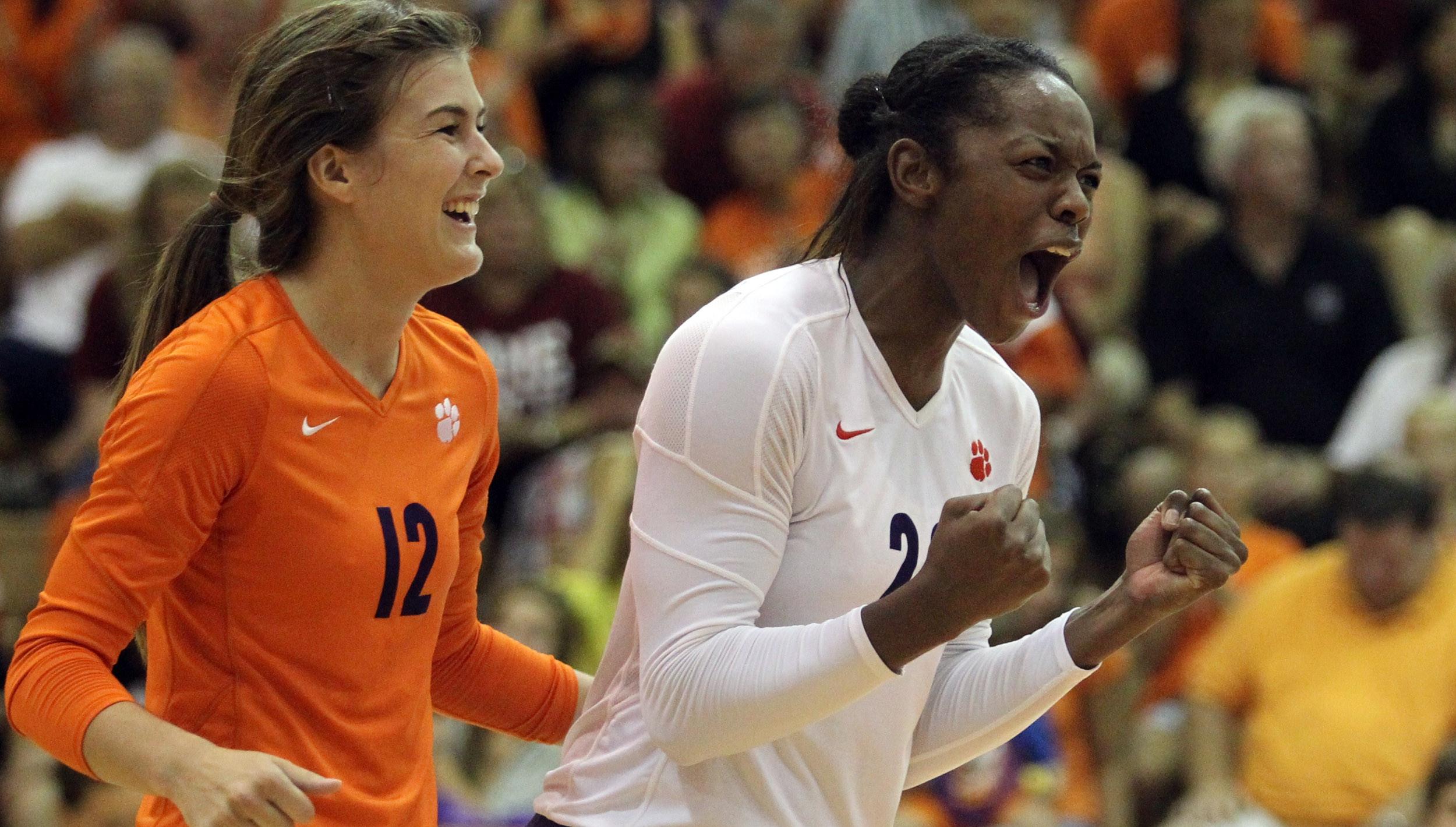 Clemson Powers Past UCF in Five

ATLANTA, GA – The Clemson volleyball team shook off a tough loss on Thursday and took down UCF, 3-2 (25-19, 19-25, 25-18, 20-25, 15-7), on Friday afternoon at the Georgia State Sports Arena. Clemson (5-3) posted a season-high 16.0 blocks and held UCF (6-2) to .127 hitting en route to the eighth win in 11 all-time meetings with the Knights.  It was Clemson’s second five-set win of the season, with the other coming last Friday at home against South Carolina. Mo Simmons led the Tigers with 18 kills, and also added 12 digs. Karis Watson, Beta Dumancic, and freshman Leah Perri each added eight total blocks, with Perri also putting down 13 kills and Dumancic adding 11.  Perri now has double-figure kills in three of her last four matches, and set a career best with seven digs and the eight blocks. Dumancic also added six digs in the match.  Kamryn Sherman earned her first start of the season at setter and had a career-high 46 assists, including the 500th of her career, seven digs, four kills, and three blocks. Libero Kristin Faust had 22 digs for the second straight match, and defensive specialist Niki Collier added 13 digs and an ace.  Clemson used a 9-0 run in the fifth set propelled buy Dumancic, who had three kills, two blocks, and an ace in the set, to seize control of the match. Simmons also added three kills on four swings in the set, and served nine straight points for the Tigers, who used a 13-1 run to turn a 6-2 deficit into a 15-7 win.  The Tigers passed much better on Friday compared to Thursday, when Georgia State rolled up nine aces in four sets. On Friday, the Knights managed just three on 94 serves. Three of Clemson’s primary passers, Faust, Collier, and Irem Bayramoglu, were a perfect 66-for-66 in serve receive. Simmons was also good, going 18-for-19 in her reception attempts.  Defense dictated play for Clemson, who had 14 blocks in the three sets they won, and just two in the other two sets. Additionally, the Tigers did not allow an ace in the three sets they claimed.  The Tigers held one of UCF’s top hitters, Angelica Crump, to a .079 hitting match on 63 swings, and blocked her four times in the final set, including on the final two points. Clemson’s offense was good in spots, although they hit into 13 blocks for the second straight match and hit just .150. However, when it counted in the fifth set, Clemson hit .438 with nine kills in 16 attacks.  Clemson will now be off until next Friday when the play host to Alabama, Troy, and Delaware for the Clemson Classic in Jervey Gym.