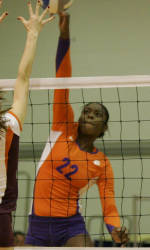 GAIINESVILLE, FL – The Clemson volleyball team opened the Campus USA Credit Union Invitational at the O’Connell Center at the University of Florida with a 3-0 (25-18, 25-16, 25-16) sweep of Florida Atlantic on Friday morning. The Tigers will play Jacksonville at 5:30 p.m., and then take on No. 9 Florida Saturday at 4:00 pm.

Sandra Adeleye continued her solid play for the Tigers, going for 11 kills against only two errors. Mo Simmons also added ten kills against just one error in 16 chances for a .562 mark, and also tallied three blocks. Alexa Rand had seven kills and a match-high five blocks.

Junior Cansu Ozdemir had 10. The Tigers held the Owls to .010 hitting for the match, their second-best mark of the year, and had seven blocks, including five in the third set.

Clemson started a little slow, perhaps shaking off the 10:00 am start, but quickly picked up the pace on both ends. Setters Hannah Brenner (15 assists) and Kamryn Sherman (17 assists) guided the Tigers to hitting percentages that improved in each set. Clemson hit just .146 in the first set, but nearly doubled the figure in the second set, hitting .286, and then a .444 mark in the third set.

In the first set, Clemson sent the ball to Adeleye on 13 occasions, and she was able to convert on five occasions. Cansu Ozdemir had six digs and Patzin added five of her own.

Clemson took advantage of some FAU mistakes in the second set. The Owls had ten attack errors, only one of which was a block, and also had two service errors. The Tigers score the other 11 points on kills, led by Rand’s four and Simmons’ three.

The third set was all Tigers, as Clemson ran out to a 14-7 lead. Adeleye was a perfect 4-for-4 in the set hitting, while Simmons added four kills and Faust three. Rand also added two kills and was in on four blocks as Clemson recorded five total in the set and held the Owls to .097 hitting.