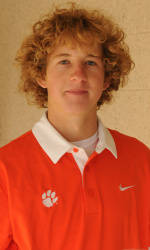 CLEMSON, SC – Derek DiFazio and Cal Hilsman are both participating in tennis tournaments this summer.

DiFazio, a rising senior, is competing in the main draw of a Futures Pro Circuit Event in Rochester, NY. He will play Oliver Sajous of Haiti in the first round. Sajous is currently ranked 1104 in the ATP World Rankings.

DiFazio also played in and won the Westchester Open Event in New York earlier this summer, winning five matches and defeating Andrei Boldarev in the finals.

Hilsman, a redshirt freshman, participated in the Tennessee Valley Open Championships where he advanced to the third round of both singles and doubles. He was seeded 9th in the singles tournament and 5th in the doubles tournament. He defeated Nathaniel Schnugg who was a two-time All American for University of Georgia. Schnugg was consistently ranked in the top 10 in ITA Collegiate Rankings during his tenure at UGA.

“We are very excited about Cal’s progress over the summer,” said Clemson Head Coach Chuck McCuen. “He has been working extremely hard and we feel he will be a large part of our success next season. We are also very happy with Derek and his hard work this summer.”