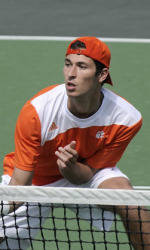 Boryachinskiy is now in the quarterfinal round in the A Draw.

In doubles, fourth-seeded Carlos Alvarez-Gera Boryachinskiy (CU) d. Will Beck and Zach Pine (Va. Tech) 8-4 in the first round of play.

“Coach Boetsch and I are happy with the way the guys competed in the first day,” said Clemson Head Coach Chuck McCuen. “Our strength and conditioning coach David Helms has this team fit and they never gave up all day. We had some very solid wins today and fought hard for every point.”

The Tournament will continue in Atlanta on Sunday and Monday.