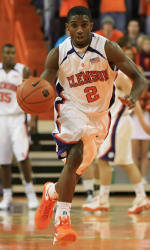 CHAMPAIGN, Ill. (AP) – Demontez Stitt scored 18 points and Trevor Booker had 16 to lead Clemson to a 76-74 win over Illinois on Tuesday night in the ACC/Big Ten Challenge.

Raymond Sykes and K.C. Rivers added 14 points apiece for Clemson (8-0), which overcame a 40-32 halftime deficit to earn their fifth straight win in the challenge.

Clemson turned the tables on defensive-minded Illinois (6-1) by causing havoc in the backcourt with a full court press, forcing 17 turnovers.

After shooting 56 percent in the first half Illinois went cold down the stretch, going 2-for-8 from the field in the final five minutes. Illinois wasn’t able to get a shot off in the final seconds.

Mike Davis led Illinois with a career-high 28 points, including the first 12 for the Illini after the break. Demetri McCamey added 20 points.