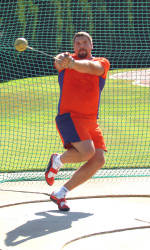 CLEMSON, SC – With the 2010 indoor track & field season in the books, the Clemson Tigers will travel to Charlotte, NC this weekend to compete in the first outdoor meet of the season, the 49er Classic. The meet will be held Friday and Saturday at the Irwin Belk Track. Live results will be available on FlashResults.com.

Clemson will focus most of its opening weekend completion in the middle distance and throwing events. Two-time All-ACC javelin thrower Linda Buchholz is one of the team’s top performers slated to compete this weekend for the women’s team, while hammer throwers Zach Berg and Alex Padgett highlight the list of competitors from the men’s roster.

Buchholz will actually compete in both the high jump and javelin throw. The school record-holder in the javelin, she and Clemson’s No. 2 all-time athlete in the javelin, Bethanie Wachna, are scheduled for 10:00 AM Saturday in the event. Wachna will be making her return to action following a season-ending injury prior to the ACC Outdoor Championships last April.

The men’s hammer throw competition will be held Friday at 3:15 PM. Padgett, who ranks third on the Tigers’ all-time performance list, and Zach Berg, fifth in the Tiger record books for the hammer, should be among the favorites this weekend. Berg is coming off an All-ACC indoor season in which he was among the nation’s most consistent in the 35-pound weight throw. Padgett was All-ACC last season in the hammer.

Women’s thrower Brittney Waller will compete in two events Friday, the discus and the hammer. The Greenville, SC native was fifth in 2009 at the Nike Outdoor Nationals in the high school discus throw.

On the track this weekend, Clemson’s middle distance groups are slated to see plenty of action. On Friday, several student-athletes will compete in the 1500 meters, highlighted by Alyssa Kulik from the women’s team and Will Noble and Chris Slate from the Tiger men’s team. Ryan Mangone and Jasen Turnbull get in on the action Saturday at 1:40 PM in the 800 meters.

Also on the track Saturday, Stephanie Buffo is entered in the 3000 meter steeplechase.