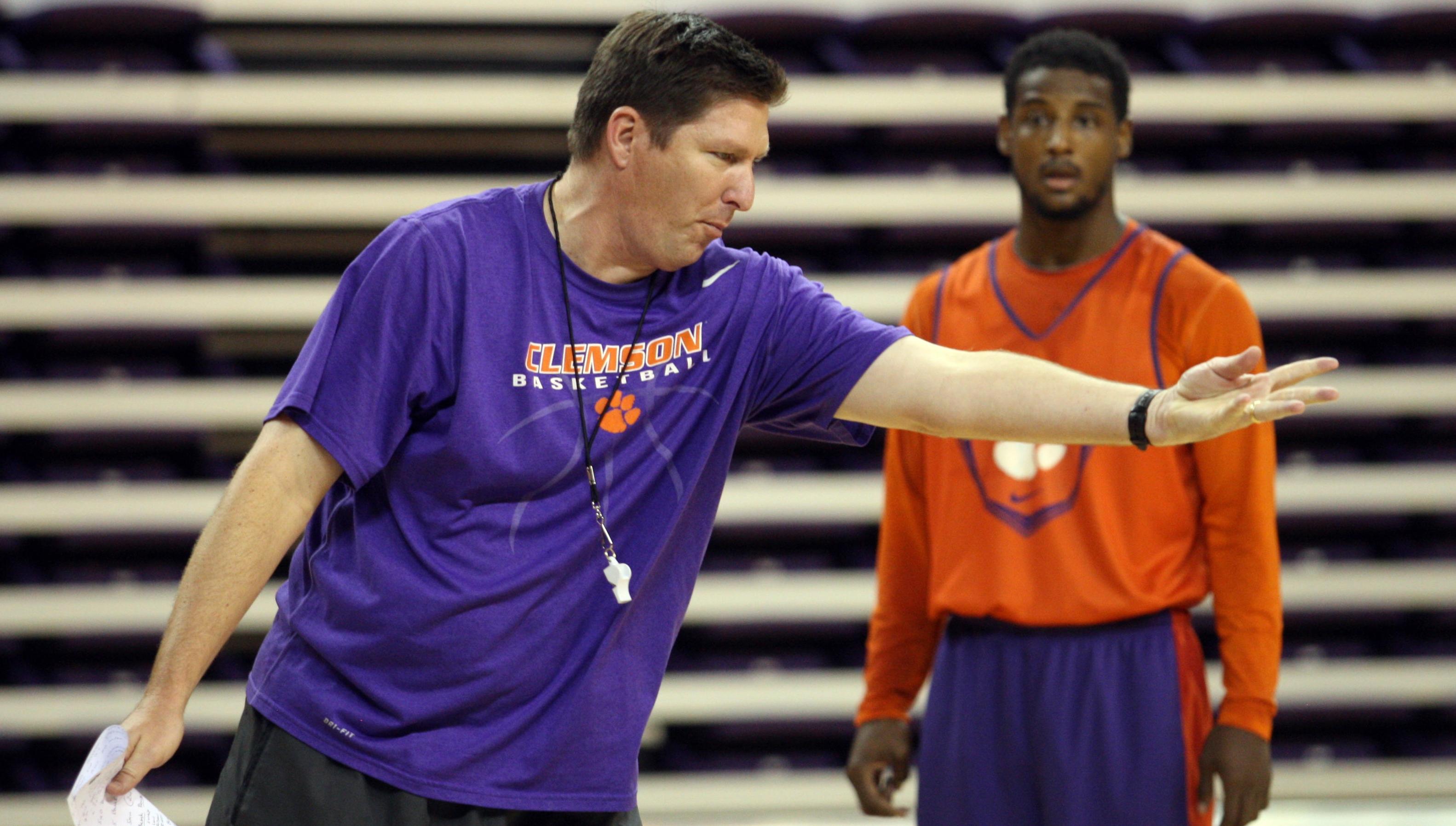 CLEMSON, SC – The Clemson men’s basketball team will officially open up the 2013-14 season with a two and a half hour practice on Sunday at 2:00 PM in Littlejohn Coliseum. Both the men’s and women’s teams will combine to host the annual basketball tipoff event, Rock the ‘John, on Friday, Oct. 18 at 8:00 PM. Sunday’s practice is the first of 30 allowable in the six weeks leading up to the season opener.

“The new practice structure allows coaches more time to implement their system,” said Head Coach Brad Brownell. “This will help us refresh some of what we did in Italy, but some of it will be new because of the addition of Jaron Blossomgame, Ibrahim Djambo and Sidy Djitte – three guys who weren’t available on the trip. I do think this helps the players ease into the start of the season a little better, as opposed to going from two hours of skill work per week to where you’re practicing 16 to 18 hours. We’ll go about three days and then take a day off, especially this first 10 days.”

Clemson will start practice without the services of Patrick Rooks, who will undergo surgery soon to repair an injured hip suffered in the preseason. The freshman sharpshooter from Charlotte, NC (Charlotte Christian School) will miss the 2013-14 season due to the expected recovery time of the surgery. Dr. Larry Bowman will lead a team of surgeons from Blue Ridge Orthopedics that will be performing the procedure.

“This is an unfortunate situation for Patrick,” Brownell said. “He is a three-point specialist who shot the ball very well in Italy. Fortunately for us, we do have great depth in the backcourt. It’s a unique injury, something I haven’t seen in 20 years of coaching. I know our doctors and athletic trainer will do everything in their power to get him healthy. We look forward to having Patrick ready to go next season.”

Eight lettermen return from last year’s team, including junior starters Rod Hall, Damarcus Harrison and K.J. McDaniels. For the first time since 1995-96, Clemson will have no seniors on its men’s basketball roster. The Tigers have five juniors, five sophomores and four freshmen.

“I’m really excited to be working with this group of young men,” Brownell said. “They’re very coachable, have had great energy this fall, and get along well with one another. They enjoyed the way we played in Italy, and are anxious to see it put together in a team setting after several weeks of individual workouts.”

McDaniels is the leading returning scorer for the Tigers after averaging 10.9 points per game as a sophomore in 2012-13. Hall led Clemson in assists with 110, while rising sophomore Jordan Roper led the Tigers last season with 41 three-point goals and 35 steals. Clemson will look to replace veteran starters Devin Booker and Milton Jennings at the two frontcourt positions.

Clemson will play an exhibition game against Francis Marion on Friday, Nov. 1. The regular season officially opens the following Friday, Nov. 8 at home against Stetson. Tickets are available online at ClemsonTigers.com or by calling 1-800-CLEMSON.