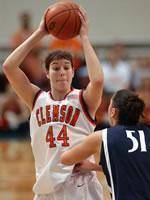 Clemson women’s basketball overcame 24 turnovers and downed Western Carolina 62-55 in the season opener for both schools. The Tigers made up for the turnovers with a +7 rebounding advantage as well as 10 blocks.

“I’m glad to get out of this game on the winning side,” said Jim Davis, head coach of the Lady Tigers. “I give a lot of credit to Coach Harper, her staff, and her team. Their players put their heart and soul into it, but I thought our players played hard.”

Reggie Maddox was Clemson’s only double-figure scorer with 11 points on 4-9 shooting.

Clemson led by as much as 14 in the first half before Western Carolina narrowed the lead heading into the locker rooms. The Lady Catamounts went on a 9-0 run to end the first half, cutting the lead to just five points at the break.

In the second half, Clemson’s biggest lead was seven at 50-43. Western Carolina chipped away at the lead and eventually it was down to 58-55 in favor of the Lady Tigers. But, Clemson hit its final four free throws to seal the season-opening victory.

The Lady Tigers return to the court on Sunday to take on Appalachian State. Tip-off is scheduled for 2:00 PM.