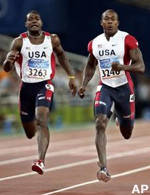 Crawford competed in three events for the USA, including the 100m, 200m and 4x100m relay. He earned gold in the 200m, leading a US medal sweep of the event. He also ran lead-off on the USA’s 4x100m relay team that finished second in that race. In the 100m, Crawford narrowly missed a medal, placing fourth. He won his heat in the first round with a time of 10.02, then captured his second round heat in 9.89. Crawford recorded a heat-winning time of 10.07 in the semifinal, then ran a 9.89 in the final. In the 200m, Crawford won his heat in every round. He recorded a 20.55 in the first round, then clocked a 19.95 in round two. In the semifinals, Crawford finished in 20.05. His time of 19.79 in the finals to win the 200m gold was also a personal-best mark. Crawford is the first former Tiger to earn multiple medals in any Olympic event, and is the fifth former Clemson track and field athlete to medal at the Olympic Games.

Charles Allen, representing Canada, competed in the 110m hurdles and as a member of the 4x100m relay team. Allen recorded lifetime-best performances in the first three rounds of the hurdles, advancing to the finals of the event in which he placed sixth. He opened his 2004 Olympic experience with a personal-best time of 13.35 in the first round, finishing second in the heat. In round two, Allen improved his career-best to 13.30 and again placed second in his heat. Allen clocked a 13.23 in the semifinals of the 110m hurdles, securing his place in the finals with a fourth-place finish in the section. A tight hamstring prevented him from competing at full strength in the finals, in which he crossed the finish line in 13.48. Allen also ran third leg on the Canadian 400m relay team that finished seventh in its heat with a season-best time of 38.64.

Itoro Umoh Coleman, a member of the Lady Tiger basketball coaching staff, was a member of the Nigerian women’s basketball team. Umoh Coleman was also selected as the team captain. She scored 45 points in the five games that Nigeria played, including three double-figure scoring games. Her best game was against Australia in the preliminaries, when she scored 12 points with six rebounds, two assists and two steals. Umoh Coleman tallied 11 points with nine rebounds against Japan, and had 10 points against Greece. Overall, Umoh Coleman averaged nine points and 4.4 rebounds per game.

Iker Iturbe competed for Spain’s men’s basketball team in his first Olympic appearance. Iturbe averaged 5.3 points per game for the tournament, and had his best game against Argentina against whom he scored 11 points. In that game, he went two for three from the field and was a perfect six for six from the free throw line. Iturbe graduated from Clemson in 1998.

Todd Matthews, a 2002 graduate of Clemson representing Sudan at the 2004 Games, competed in the 110m hurdles. He also was honored as the flagbearer for the team from Sudan in the opening ceremony. Matthews ran a 13.47 in the first round, setting a Sudanese national record. In the second round, Matthews crossed the finish line in 13.77.

A former Lady Tiger NCAA Champion, Cydonie Mothersill advanced to the semifinals of the 200m dash as a representative of the Cayman Islands. Mothersill recorded a time of 22.40 in the first round, easily winning her heat. In round two, she again won her heat with a time of 22.76. Mothersill recorded another 22.76 in the semifinals of the event, finishing fifth in the section and just missing a spot in the finals. This was Mothersill’s second appearance in the Olympic Games, as she also represented the Cayman Islands in the 2000 Sydney Games.

Another former hurdler for the Tigers, Duane Ross advanced to the semifinals of the 110m hurdles. Ross ran a 13.39 in the first round of the event, finishing second in his heat and easily advancing to the second round. In round two, Ross placed fourth in his heat but advanced to the semifinals on time (13.50). He shaved two-tenths of one second off his round two time to post a 13.30 in the semifinals, but finished fifth in his section and did not advance to the finals. Sultan Tucker was a first-time Olympian, as he competed in the 110m hurdles for Liberia. Tucker recorded a time of 13.76 in the first round, narrowly missing the cut for the second round.