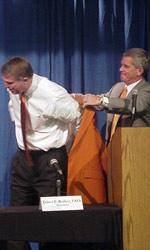 Phillips, 54, comes to Clemson with strong athletic, administrative and academic credentials and a proven track record in building championship-level programs, generating private funding, and improving athlete academic performance. He has been associated with programs that have won several national championships. At OSU, there were 10 individual national champions, and 13 Big 12 Conference championships, placing OSU fifth among the 12 schools.

“Terry Don Phillips is one of the top athletic directors in the nation, and we’re delighted that he has decided Clemson is where he wants to be,” Barker said. “He is a perfect fit for Clemson. His views on athletics align well with our vision for becoming one of the nation’s top 20 public universities and winning national championships. Terry Don is seriously competitive, but he recognizes that college athletics is much more than wins and losses. His mission is to win championships with integrity and full compliance, while helping young men and women achieve their full academic and athletic potential.”

With a doctorate in education and a law degree, Phillips also will teach courses in legal studies at Clemson, as he has done at OSU.

“We are humbled and excited to be joining such an outstanding university, athletic program, and conference. Trish and I want to thank President Barker for inviting us to join the Clemson family, and we look forward to helping Clemson achieve its goal of being one of the nation’s top universities,” Phillips said. “It will be a challenge to succeed Bobby Robinson, who is a highly respected athletic administrator and has done a superb job for Clemson University. We’re looking forward to building on the foundation he has created.”

Phillips, a native of Longview, Texas, earned his bachelor’s degree in 1970 from the University of Arkansas, where he lettered in football for three years and was honorable mention Academic All Conference. During that time, Arkansas played in the Sugar Bowl twice and participated in the 1969 Texas-Arkansas game that produced the national champion.

Phillips earned his master’s and doctor of education degrees from Virginia Tech, where he served as an assistant football coach from 1971-1978. His dissertation was on Title IX issues. He earned a J.D. degree from the University of Arkansas School of Law in 1996 and is a member of the Arkansas Bar, the American Bar Association, and the Sports Lawyers Association.

A renovation project of up to $50 million in improvements to the football stadium is scheduled to begin during the 2002-2003 academic year.

At OSU, Phillips led a team of coaches, staff and student-athletes whose accomplishments include raising approximately $20 million in private gifts, improvement in student-athlete retention rates with 53 Academic All Americans, 13 conference championships, and almost 40 post-season appearances, including two national championships in golf, a Final Four appearance, and two World Series trips.

Phillips is also active in the NCAA, currently serving as chair-elect of the Division I Infractions Appeals Committee and a member of the Olympic Sports Liaisons Committee, on which he serves as liaison for baseball and wrestling.

Barker said there was a high level of interest nationally in the Clemson position, with an initial field of more than 60 candidates.

“The fact that there was so much interest in Clemson is a tribute to Terry Don’s predecessor, Bobby Robinson. Bobby has built a high quality, nationally regarded program, and that helped us attract one of the top people in the country.”