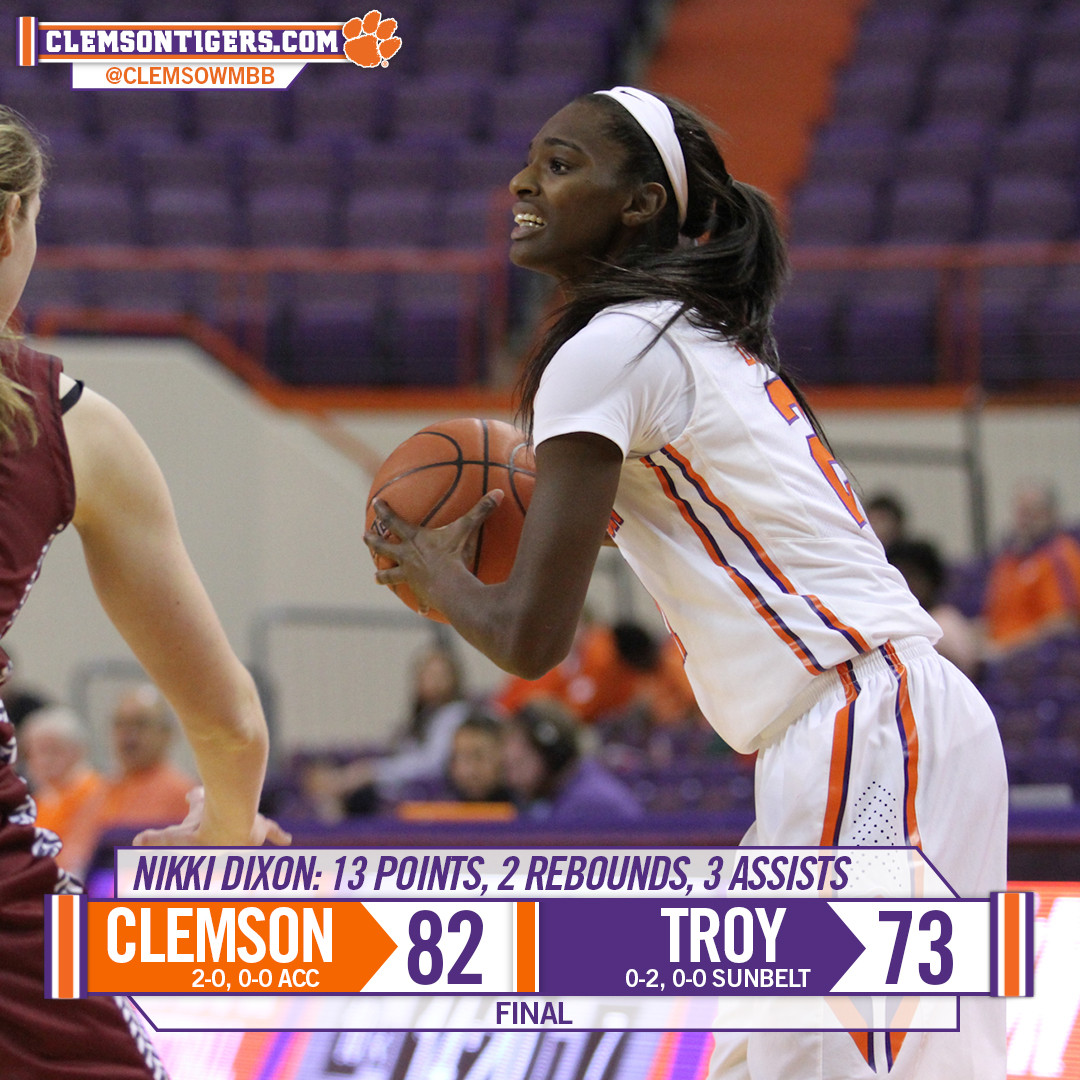 CLEMSON, S.C. — Cha’nelle Perry’s double-double propelled the Tigers to an 82-73 win over Troy on Sunday in Littlejohn Coliseum. With the win, the Tigers improved to 2-0 on the season while the Trojans fell to 0-2.

Perry, playing just her second collegiate game, posted 15 points to go along with 12 rebounds and five assists. She was joined by two other freshmen in double figures, Shelbie Davenport with 17 and Ivy Atkism with 10. Nikki Dixon added 13 on 6-of-7 shooting.

As a team, the Tigers converted 24-of-27 at the free throw line for a .889 figure. Clemson was strong defensively, tallying 16 steals and eight blocked shots in the contest. Dixon contributed three steals to bring her career total to 189.

Clemson jumped out to a strong start, posting the first eight points of the game. Troy battled back and took a seven-point lead at 28-21 with six minutes remaining, before Clemson closed the half on an 11-4 run. Perry posted nine of her points in the opening frame.

The Tigers controlled the action throughout the second half, as Troy got no closer than three. Once the Trojans pulled within three at 46-43, Clemson notched a 10-3 run spearheaded by six points from Dixon.

The Tigers return to action Thursday, Nov. 20 at South Carolina. The team’s next home game is Sunday, Nov. 23 versus Furman.

“The positive takeaway is that we won the game and the defensive play of MaKayla Johnson. She had missed some time and it speaks major kudos to her that she could step right in and not miss a beat. Then Shelbie [Davenport] had 17 points. She didn’t shoot particularly well from three but she did other things well. Nikki Dixon being very unselfish coming off the bench and taking care of business was huge for us. We did an exceptional job from the free throw line. This was a tough weekend for us with a game on Friday at noon and then one day to prepare for Troy, who is very athletic. i’m really proud of the way we maintained our composure. We’re growing and just have to focus on the small victories.”